Tehran looms on the horizon

Tehran looms on the horizon 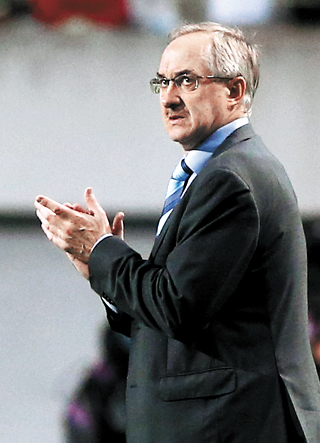 Now that the Rio Olympics have ended, it is time for the final round of the Asian qualifiers for the 2018 FIFA World Cup, and the road to Russia is expected to be a tough one as Korea’s senior football team and its skipper, Uli Stielike, are slated to meet Iran along the way.

German-born manager Stielike announced the roster for the qualifiers on Monday, signaling the start of the journey to the Russia World Cup. After the draw for the qualifiers in April, Korea (World No. 58) was assigned to Group A with Iran (39), Uzbekistan (55), China (78), Qatar (80) and Syria (105). While Korea, who has made it into every World Cup since 1986 in Mexico, is a favorite to prevail once again and take a spot in the upcoming quadrennial event, the team still has to take on Iran, a team against which Korea has a relatively poor record - with nine wins, seven draws and 12 losses.

The football rivalry between Korea and Iran is remarkably intense, but the odds are not in favor of Korea. Among the five teams that are in Group A with Korea, the Iranian squad is the only team that Korea has a losing record against. In the most recent three games against Iran, Korea suffered defeats in all of them. In the past qualifiers for the World Cup, Korea and Iran met on seven occasions, in which Iran had the upper hand with two wins, one loss and four draws.

If the records aren’t ominous enough, what’s more troubling about the first match against Iran on October 11 is that it’s an away game for Stielike and his players. In the history of Korean football, the national team recorded no wins when it visited Iran for a duel. In the six games played in Tehran, Korea came out with two losses and four draws. Even Stielike couldn’t pull off a win in an away game against Iran, returning home with his head hung low after the match in 2014.

Located at an altitude of 1,274 meters (4,180 feet) above sea level, the Azadi Stadium in Tehran can hold over 110,000 spectators. And as if the challenge of playing at high altitude isn’t enough, Iranian fans notoriously intimidate whoever makes a visit to Tehran by booing intensely or howling whenever the other team scores or even has the ball.

Still, Korea has a million reasons to bring home a win from Iran regardless the odds. After Japan, Iran is Korea’s archrival when it comes to football and the match against the team means a lot to Korean fans. The latest incident came during the final round of qualifiers for the Brazil World Cup that took place on June 2013. After Iran defeated Korea 1-0 down in Ulsan Munsu Stadium, Carlos Queiroz, Iran’s manager, made a raised fist gesture. This gesture angered the players and staff, almost causing a physical brawl between the two teams. After the incident, Iran essentially became public enemy No. 1 for the Korean football team.

Korea should be able to pull off relatively easy wins in the first three matches before going toe to toe with Iran, which means Korea is likely to go into the Iranian match with that much more momentum. And there are reasons to believe Korea may have a good shot against Iran, too. For one thing, Javad Nekounam, the anchor and leader of the Iranian squad who caused anger among Korean fans with his offensive remarks and unclean plays on the pitch, has retired from the team. Also, the Iranian football team is embroiled in various controversies including Queiroz expressing his displeasure with the Iranian football association and possible resignation from his post.

“The match against Iran is the most important of all,” Stielike said. “Now it is time to defeat Iran.”

Along with senior national team regulars such as Ki Sung-yueng and Son Heung-min, the roster unveiled had few new names as well including FC Red Bull Salzburg forward Hwang Hee-chan. The 20-year-old showed impressive plays during the Rio Olympics, scoring opening goal for the Korean outfit during a 3-3 draw with Germany in the preliminaries. Full back Oh Jae-suk was another newcomer on the senior team. Oh previously had a chance to play for Stielike earlier in the year, but the opportunity was dashed with an injury

Korea’s first game in the final round of the regional qualifiers will take place at home at Seoul World Cup Stadium on Sept. 1, 2016, against China.