Brunei works to become a new tourism hotspot: After years of flying under the radar, small nation shows its stuff

Brunei works to become a new tourism hotspot: After years of flying under the radar, small nation shows its stuff 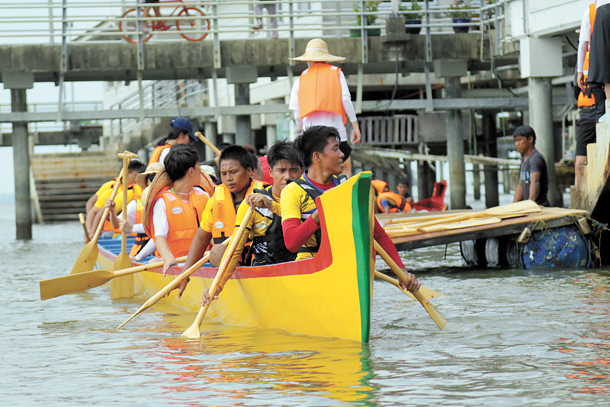 BANDAR SERI BEGAWAN, TEMBURONG, Brunei - While many people visit nearby countries like Thailand and Malaysia, the nation of Brunei Darussalam has largely been ignored by Korean tourists.

Last year, only 1,869 people visited the country from Korea - compared to the 1.37 million that headed to Thailand.

Brunei is trying to change that, with a recent push to increase interest in its pristine natural environment. The government has been working to turn certain parts of the country into eco-tourism destinations that pair preservation with accessibility.

It’s also pursuing community-based tourism projects that encourage travelers to interact with locals. This way, the residents of each village can be the direct beneficiaries of the increasing number of tourists, earning money and learning about the world through things like homestays.

One example of these efforts was a recent trip organized with the Asean-Korea Center, an intergovernmental organization that promotes economic, social and cultural cooperation between member countries of the Association of Southeast Asian Nation, or Asean, and Korea.

The trip invited a group of college students from Korea and other Asean countries to learn more about the country and its culture, as well as give suggestions for how to make Brunei more appealing.

“We’re looking for sustainable and continuous partnership and friendship rather than the pursuit of immediate interests when it comes to cooperating with Asean countries to help them develop travel programs,” said Kim Young-sun, secretary general of the Asean-Korea Center.

“We want as many young students from Korea and elsewhere to join and seek ways to develop eco-tourism options suitable for each country.”

Eighteen students arrived at Seri Tanjung village on Aug. 17, where they would stay for the next six days. The students and a Korean delegation from the Asean Center were welcomed with music, food and an egg, which promotes prosperity according to local tradition. Some of the female students got to try on the hijabs owned by the girls at their homestay houses, and many stayed up late laughing and talking while eating locally made snacks.

“The family I’m with was eager to let me know more about their culture every night,” said Moon A-young, a student at Pukyong National University in Busan.

“I got to learn many of the trendiest way to wear a hijab and where to find fashionable ones.”

Left: One of the only ways to access Brunei’s rainforests is by boat as there are few paved roads. Middle: Secretary-general Kim Young-sun of Asean-Korea Center tries local food with students from Korea and Asean countries, as well as a local resident. Right: One of the most adventurous activities available at the Ulu Temburong National Park is a walk through the rainforest’s canopy 40 meters (130 feet) high. [BRUNEI TOURISM, LEE SUN-MIN, ASEAN-KOREA CENTER]

The young kids in the village were particularly eager to interact with the visitors, playing hide and seek, getting piggy back rides or flying kites together. They also divided into teams to race boats, one of the most popular activities among locals in their leisure time.

The cultural exchange, however, went both ways.

“Mianhae mianhae hajima, do you know the song?” asked Badzlin, a young girl in the village. She was singing the lyrics (“Don’t be sorry”) to a song by popular K-pop boy group Big Bang. The power of hallyu, or the Korean wave of popular culture, was evident in the small village, whose youngsters were well-versed in simple Korean phrases they’d picked up from various idols. They would shout “saranghae,” which means “I love you,” at everyone from their families to their newly made friends.

While everyone spent most mornings and evenings in their homes, the days were filled with outdoor activities. Riding all-terrain vehicles into the mud and over sand dunes was a thrill, and planting trees at a local farm gave the students another reason to return in future years.

But the trip’s highlight was the visit to Ulu Temburong National Park, which is located about an hour away by boat from the airport located the capital city Bandar Seri Begawan.

The park is only accessible by boat, as there are no roads for fear of polluting the natural environment with car exhaust or noise that might scare off the wildlife.

From the entrance to the park, visitors have to change to a smaller boat. The 40-minute ride gives visitors a chance to enjoy the clean air, vibrant landscape and clear water. Colorful birds often fly alongside the boat as well, an indication of the country’s status as a prime bird-watching destination, as it’s home to 600 species, according to Brunei Tourism Minister Dato Ali Apong.

He added that some species no longer found in other countries can still be seen in Brunei.

Once back on land, the students were able to partake in one of the park’s signature activities: a walk through the rainforest canopy.

The government has installed 40-meter-high (130-foot-high)that allows for strolls among the trees. Along the way up, visitors can see things like lizards in camouflage and leaves big enough to be used as umbrellas.

“I never thought I’d be able to explore a rainforest in such a remote area,” said Kang Seung-hoon of Pusan National University before climbing up the structure.

“I’m surprised to see that there can be many different things to see here, and I’m happy that I was able to take a less-traveled route.”

Soaked in sweat from both the climb and the nerves from being so high up, the students were ready for a swim.

Fortunately, the next activity was rafting down the river, where small inner tubes carried them through waters that were at turns calm and excitingly fast.

“The travel experience in Brunei isn’t so convenient yet, but that makes the destination more charming to many,” said Kim.

“Still, we need to improve our eco-tourism offerings that students will be excited to share, leading Brunei to become more appealing.”