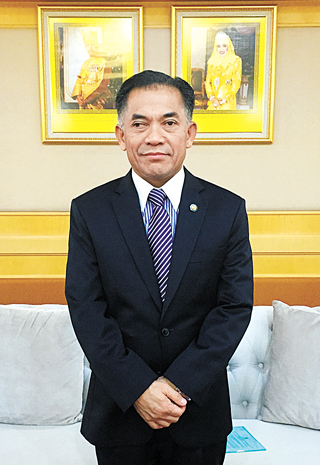 BANDAR SERI BEGAWAN, Brunei - This tiny nation boasts a wealth of amazing natural scenery and man-made structures, and Minister Dato Ali of Brunei’s Ministry of Primary Resources and Tourism is doing everything he can to make more people aware of its offerings.

Most of the country’s national income has historically come from oil and gas, but it has recently started to focus on expanding tourism to help to diversify its economy. With the recent fall in oil prices, the move is essential for Brunei, the minister said in a recent interview with the Korea JoongAng Daily.

Oil and gas currently contributes to around 60 percent of the country’s gross national income, compared to just 2 percent by tourism. The ministry is working on bringing up that number by one percentage point in the next few years.

“Although at the moment it might be difficult to compete with Indonesia, the Philippines and Thailand, which have been developing Bali, Cebu and Phuket for a long time, we have our own character and heritage,” the minister said.

He added that the country is working to publicize its unique combination of natural environment; so-called water villages, which are built over rivers; and unique capital city, which offers many museums and mosques.

The country joined hands with the Asean-Korea Center to better promote its community-based tourism program. Through the program, visitors can book a stay in one of the water villages, spending time with locals while also adventuring through the rainforest.

Brunei’s rainforest, called Ulu Temburong National Park, isn’t so new to Koreans as it was featured in the show “The Law of the Jungle,” which starred comedian and actor Jung Jun-ha.

“Korean shows that film in Brunei will help show how the country is different from other neighboring Asean countries, so we want more of them to come,” he said.

The number of tourists from Korean has fluctuated substantially over the last five years.

The ministry has recently been promoting Brunei’s unique tradition of living on the water, embodied by the ubiquitous water villages. According to the minister, one of ancient Brunei’s royal palaces was also built in this style. He said visiting the villages offers an opportunity to learn more about Brunei’s history, and the ways in which locals relied on fishing and trade with neighboring countries before the oil boom.

While the ministry has been putting effort into spreading awareness of attractions for foreign tourists, it has also been working on necessary improvements in infrastructure for visitors when they arrive. There’s no real public transportation system in the country, and taxis are often hard to find.

“We see the need for a type of transportation for travelers and foreign workers here, so we are reviewing options at the moment to make more taxis available or come up with a system that’s a lot of Uber style,” the minister said.

In the meantime, the ministry encourages people to book package tours offered by resorts or a national park that can provide transportation, whether by bus, taxi or jetty boat.

“We want to make sure travelers feel their money is well spent on a trip to Brunei so that they want to come back again to visit and spread awareness of the country. ”