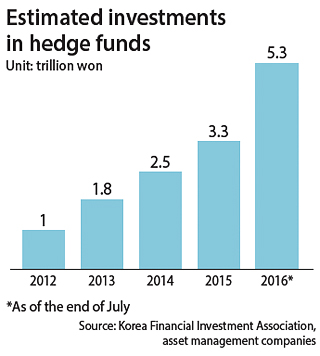 Korea’s finance industry marked a milestone in 2011, when the country’s first homegrown hedge fund was established following amended government regulations. Ever since, the size of the local hedge fund industry has grown fivefold to an estimated 5.3 trillion won ($4.8 billion) in investments as of the end of July.

Now, the financial industry is likely to experience another watershed as securities companies are now allowed to manage high-risk, high-return investments.

The allure of hedge funds, with their diversified portfolio of derivatives, options and futures, becomes strong when the market is downtrodden and benchmark interest rates are low. And the current market conditions in Korea are ideal for hedge fund growth. The regulatory tailwind and growing demand are prompting major brokerage firms to take big bets on hedge fund management.

Earlier this month, NH Investment & Securities, the country’s second-largest brokerage, became the first securities company to start a hedge fund. NH invested 200 billion won of its own money, while other participating investors pitched in 60 billion won.

“Investors now have few options to expect high rates of return,” a source at NH said. “Under the circumstances, many perceive hedge funds as an alternative investment option, which is the reason why we project the segment will grow further.”

NH set a target return rate of 15 percent, though it declined to reveal the actual current yield. The brokerage firm aims to increase the fund size to 300 billion won by the end of this year and to 400-500 billion won next year.

Lee Dong-hoon, head of the hedge fund division at NH, said the company would pursue multiple strategies, including a long-short strategy, mezzanine financing and convertible arbitrage, to create stable returns and minimize risk.

So far, asset management companies such as Samsung Asset Management and Mirae Asset Global Investments have dominated the hedge fund market, but that may change with the entry of securities firms.

The Financial Services Commission, the country’s top financial regulator, is said to be considering further relaxing regulations and lowering the minimum level to 5 million won through indirect investment.