Golf’s return to Games was a swinging success

Golf’s return to Games was a swinging success 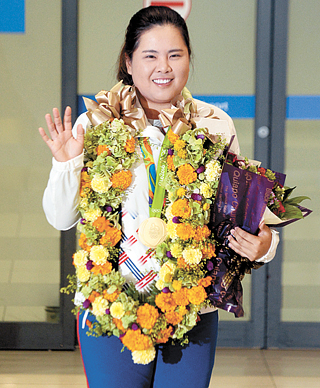 Korean golfer Park In-bee arrives at Incheon International Airport on Tuesday with a gold medal from the Rio Games around her neck. Although golf came back to the Olympics after a century-long absence, it is questionable whether the sport will stay around beyond the 2020 Tokyo Games. [NEWSIS]

RIO DE JANEIRO - Adilson da Silva of Brazil hit the first shot that put golf back in the Olympics for the first time in more than a century. Park In-bee hit the final putt that capped off two weeks that could not have gone much better for a sport trying to make a good impression.

Peter Dawson was on the first tee when it started and said he had a tear in his eye when it ended.

“It exceeded my very best expectations,” Dawson, president of the International Golf Federation, said Sunday. “We had two great competitions that were very exciting, medalists from six different countries. It was marvelous. The way people enjoyed themselves and clearly relished the Olympic experience is heartening.

“It was a very different week for golf.”

The sport left Rio in much better shape than when it arrived.

The celebration of six medalists dwarfed the absentee list that included the top four men in the world. All but forgotten were the delays in getting Olympic Golf Course built because of various protests and lawsuits, which cost so much time that a test event at the Gil Hanse design could not be played until just five months before the Olympics.

“It was all a bit of trepidation going into the unknown,” said Dawson, former chief executive of the R&A. “We know how to put on golf events, despite the fact it was in foreign territory. I think to see how much the players enjoyed it exceeded our expectations. I know I’m delighted I didn’t miss the experience. I’ll never forget it.”

At an Olympics with half-filled venues, men’s golf was a sellout for the final round, when Justin Rose made birdie on the last hole to end a great duel with Henrik Stenson.

Crowds were smaller for the women the following week, though it had a distinctive Olympic feel with fans spread out across the course, easy to spot by the color of the shirts for the country they watched.

As for television, NBC Sports showed the final 90 minutes of the men’s golf and it was the second-highest rated window of the year behind the Masters.

Women never had that chance because the starting times were moved up for the final round to avoid storms and finished early. Even so, Golf Channel said women’s golf recorded new benchmarks every day. The third round brought the highest numbers for any third round in women’s golf during daytime hours since 2011.

“Not having ever experienced golf in the Olympics, it was difficult to put expectations to it,” IGF Vice President Ty Votaw said. “But coming through these two weeks, I would say 41 countries participating, six countries earning medals and a country like Russia owning the Olympic scoring record ... our goal of trying to have as many countries participate and be competitive so that the sport could be brought to new fans who might be interested in taking up the game was validated.”

The scoring record belongs to Maria Verchenova, whose participation was confirmed only the day before the opening ceremony because of Russia’s doping scandal. She made a hole-in-one on her way to a 62.

“It’s going to push the Russian golf forward and hopefully as much as it can,” Verchenova said. “Maybe the kids see me on TV, and maybe they say, ‘Oh, I want to play golf, as well.’ Hopefully do the best.”

The next step for golf is staying in the games, and executives left Rio feeling bullish about the International Olympic Committee review next year of all events. Golf already was assured of being in the Tokyo Games in 2020.

Rose said if he could make a case for golf staying beyond Tokyo he would say, “Were you in Rio?”

It’s more complicated than that, though it will be hard to find flaws. The idea was to put its best foot forward, and golf didn’t trip.

“We’re more confident, but not complacent,” Dawson said. “We’ve had some strong words of congratulations from many IOC members. The golf events did particularly well in TV ratings. There are a lot of sports pitching their events. But I think golf made a lot of friends.”