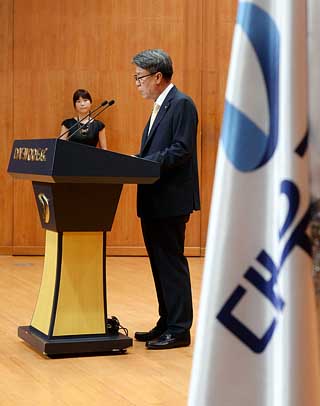 Park Chang-min, Daewoo Engineering &Construction’s new CEO, gives his inauguration speech at the company’s headquarters in central Seoul on Tuesday. This is the first time the construction company’s top mantle has been taken up by someone outside of Daewoo. Park, the former chief of Hyundai Development Company, said in his speech that he will try to revive Daewoo E&C to become the No.1 builder by changing the organization to increase efficiency, strengthen productivity and encourage ethical business practices. Park’s appointment as CEO was approved by shareholders on Tuesday. [NEWSIS]