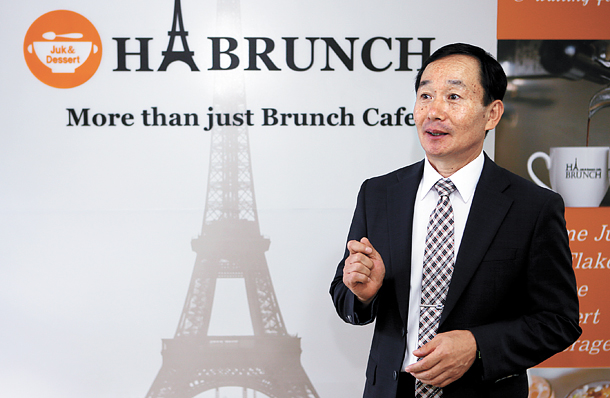 HiBrunch, a franchise that sells Korean pudding and desserts, signed a deal last month with the Philippine food-service company, Forever Rich, to launch 25 cafes in the Southeast Asian nation this year.

The deal sends a message that Korean food doesn’t have to be fancy or high-end in order to appeal to foreigners.

Launched in March 2015, HiBrunch’s menu offers an array of Korean puddings such as sweet red-bean pudding and pumpkin porridge. The brand has thirty branches operating in Korea.

“The plan is to open 25 cafes within the first year, starting from the first shop of 200 square-meters (215 square-feet) in Robinsons Department Store in Manila,” said Shim Woo-yeol, CEO of HiBrunch. The company will receive royalties along with 3 percent of total sales.

When asked how the Philippine food-service group discovered HiBrunch, Shim said a Philippine tourist attending the Boryeong Mud Festival in South Chungcheong ate at a HiBrunch at the city’s rail terminal. He tried their porridge and posted a photo on his personal social media account saying, “There’s an interesting cafe where you can taste Korean porridge and coffee.” The tourist was an acquaintance of an employee at Forever Rich.

Forever Rich got in touch with HiBrunch and, three days later, requested a meeting. On July 19, HiBrunch organized a tasting event in the Philippines and invited one hundred potential franchisees. “After seeing their positive responses, Forever Rich was eager to sign a contract as soon as possible,” said Shim. “That’s how the whole deal was completed in such a short period.”

Shim has worked in the Korean franchise industry for almost 30 years since he first joined the Mexicana Chicken brand in 1987. He became an industry legend by being promoted straight to senior executive for having opened multiple branches in his first three months.

In 1990, he started his own company, which in fifteen years developed a portfolio of fifteen brands and 3,000 stores. With shrinkage, the company currently has eight brands including HiBrunch and 300 stores.

His ups have come with some downs. Fifteen years ago, he started a franchise in China that specialized in samgyeopsal (pork belly). One year later, he closed it. “The reason was because we tried catering to local tastes too much, putting less chili powder and using ingredients from China,” said Shim. “In the end, it turned out to be neither Korean nor Chinese food.”

Shim intends to stick to Korean recipes when developing menus for HiBrunch. For instance, the red-bean porridge and pumpkin porridge - the most popular items - use ingredients from Korea exclusively. It will be the same way for the Philippines branches.

“Our goal for HiBrunch is to have a footprint in 10 countries and open 1,000 branches over the next five years” said Shim. “We’re currently pushing deals to enter Malaysia, Indonesia, Vietnam, China and Japan.