Scotch lite, or with pomegranate?

Scotch lite, or with pomegranate? 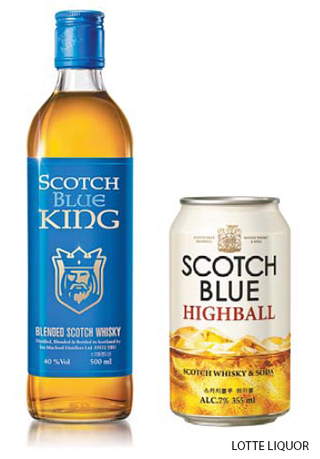 During the 1990s, whiskey was a popular drink among Korean gentlemen, but lately, sales have been on a steep decline, largely due to its pervasive image as a strong dark liquor only consumed in shady underground bars by older generations. Its high price, at 40,000 won ($35) for a 450-milliliter (15-ounce) bottle, has certainly not helped sales.

But local liquor companies are trying to revive the drink among the younger set, people in their 20s and 30s who make up a key demographic for alcoholic beverage makers, by launching more approachable versions of the distilled spirit.

Lotte Liquor has been at the forefront, releasing experimental versions of whiskey-flavored drinks since early this year to acclimate younger drinkers to the musky taste.

On Tuesday, the beverage company launched Scotch Blue King, a drink made through the traditional distillation method of whiskey but with a lower price tag of 16,005 won per bottle.

Lotte Liquor was able to reduce costs by removing certain packaging elements such as a double-lid cap and heavy glass material. Instead, the newly-launched Scotch Blue King comes with a twist cap and slimmer bottle.

“The liquor was launched with the hope that whiskey will be more widely consumed by the general public,” a Lotte Liquor spokesman said. “Its appearance and price will both be much more approachable compared to traditional whiskey products.”

The most profitable retail channels for most whiskey makers are still high-end bars and lounges, but Lotte Liquor plans to buck the trend by distributing its new product at discount marts and convenience stores.

In July, Lotte Liquor also released a canned version of its whiskey-flavored drink, Scotch Blue Highball, which is mixed with seltzer water and has a lowered alcohol content of 7 percent.

More traditional liquor companies have also been following the trend as a way to survive in the ever-dwindling whiskey market.

“These liquors were launched exclusively in the Korean market, acknowledging the trend that low-alcohol-content whiskey is catching on as a trend,” a Diageo Korea spokeswoman said. “So far, the response has been quite good.”

Pernod-Ricard Korea, another major player in the Korean liquor industry with brands like Ballantine’s and Imperial, owns two labels - Imperial Neon and Eclat by Imperial - specifically made with a wider range of consumers in mind.

Imperial Neon maintains the traditional 40 percent alcohol content but has a smoother flavor with fruity and nutty notes. Ever since the product was launched last October, it has sold 900,000 units nationwide, a laudable achievement considering the diminishing market, according to a company spokesman.

Eclat by Imperial, on the other hand, is a whiskey-flavored spirit targeted towards female drinkers, with a lower alcohol content of 31 percent and a pomegranate aroma.

Golden Blue, a homegrown spirit manufacturer which became the No. 2 player in the local whiskey market this year, capitalized on the low-alcohol-content trend by releasing whiskey products that all contain 36.5 percent alcohol.

After experiencing success with its flagship Golden Blue brand, the distiller launched a new label called Phantom the White in May. The label’s distinction: the drink is transparent, resembling vodka more than traditional whiskey.

“We shifted the distribution channel from high-end and karaoke bars, which are the usual market for whiskey, to cheaper bars and lounges in university neighborhoods such as around Hongik University and Konkuk University to target younger demographics,” a Golden Blue spokesperson said. “With the whiskey market dwindling, we have to expand the pie, and what will make a major difference is these people in their 20s and 30s.”

Golden Blue is looking to release another trendy version of the brown liquor in the latter half of the year, which exclusively targets younger female drinkers by infusing honey flavor to traditional whiskey content.