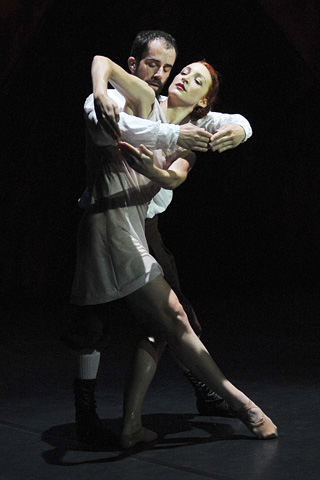 Dancers of Ballet Preljocaj performing “La Stravaganza,” which will be staged in Seoul as the opening performance of this year’s SIDance festival. [JC CARBONNE]

One section of the classic ballet “Romeo and Juliet” will be staged on Sept. 24 by a French troupe at the Seoul Arts Center’s CJ Towol Theater in southern Seoul. But Juliet will not be in a tutu doing elegant twirls escorted by a Romeo in tights. Instead, they will be jumping up and down barefoot, performing powerful breakdance-like moves.

That’s because the work is an opening performance of this year’s Seoul International Dance Festival (SIDance), an annual event showcasing current trends in contemporary dance by inviting dozens of contemporary troupes from across the globe to showcase their work and collaborate with Korean artists.

It refers to a new style of dance that appeared in the late 1970s that shifted the center of the contemporary dance world from the United States to France. According Lee Jong-ho, the festival’s artistic director, the event’s lineup has been planned to show local audiences “the quintessence of French contemporary dance of the late ’70s,” starting with the works of choreographers Carolyn Carlson and Angelin Preljocaj, known as contemporary dance legends and leaders in Nouvelle Danse.

The bold recreation of classical works including “Romeo and Juliet” and “Le Parc” will be staged by the Ballet Preljocaj on Sept. 24 to kick off this year’s festival. “Short Stories,” which will feature three short pieces by the Carolyn Carlson Company on Sept. 28, is especially noteworthy, as Carlson herself will be on stage for one piece titled “Black over Red.”

There will be several Korean performances as well, including “Immixture” by choreographer Ahn Sung-soo’s troupe Sungsoo Ahn Pick-up Group on Oct. 5. The piece consists of six scenes that, according to Ahn, create “visually perceptible music, placing delicate and continuous traditional dance movements on the distinctly different rhythms and dynamics.”

SIDance will run from Sept. 24 to Oct. 15 at various venues around the city. It will feature 42 troupes from 17 countries putting on 39 performances.