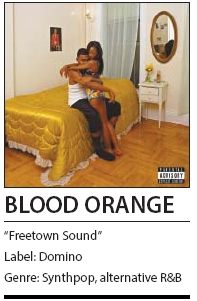 “Freetown Sound,” the latest from Devonte Hynes A.K.A. Blood Orange, is a fascinating 17-track album approximating an AM radio sound collage of yore, pop hits blending with breaking news bulletins and history capsules.

Hynes, who was in dance-punk band Test Icicles in hometown London before relocating to New York and releasing material as Lightspeed Champion, says his third album as Blood Orange “plays like a long mixtape.”

Fortunately, he never lets the eclecticism of the musical or spoken-word samples (Wally Badarou, Ta-Nehisi Coates, Mantronix or Charles Mingus, to name a few) or the long list of mostly female guests like Nelly Furtado, Debbie Harry or Lorely Rodriguez get in the way of strong hooks, captivating topics and skillful multi-layered arrangements.

Thematically fragmented and musically cohesive, Blood Orange deftly explores the signs of the times on “Freetown Sound,” interpreting what’s going on both in and around us. It’s a very 2016 album that should withstand the test of time. AP