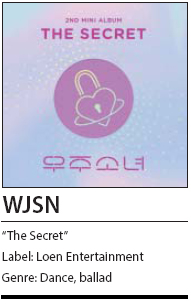 After debuting in February with their first mini-album, “Would You Like?,” WJSN’s second album contains more vivacious melodies and lyrics. As the average age of the girl group comprised of 13 members from Korea and China is 20, youthful energy and bubbly voices are found throughout the seven tracks.

A new main vocalist, Yeonjung, makes her debut with this album, and may be recognizable as one of the 11 finalists from the survival show “Produce 101” that aired earlier this year.

Contrary to the album’s title, the lyrics on “The Secret” mostly involve forthright confessions of people in love. In the title track, a girl exposes her uneasiness about a stoic lover. She says she wants him to hold back no longer and show how he truly feels.

All in all, the tracks are mostly cheesy, but the sweet voices of the group fit well with the dancy rhythms, and the optimistic youthfulness of the songs will appeal to young listeners.