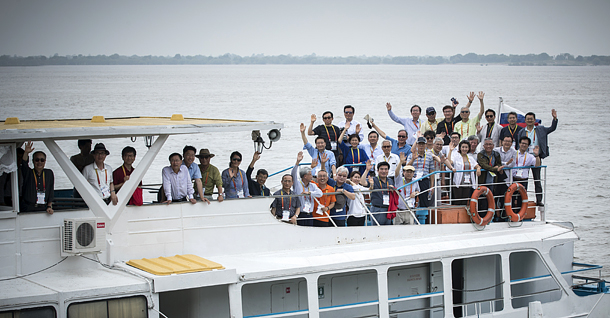 Participants in the Peace Odyssey 2016 take a ferry across the Amur River, the world’s 10th longest, which forms the border between the Russian Far East and northeastern China, in Khabarovsk on Aug. 12. [KWON HYUK-JAE]

The Peace Odyssey 2016, a journey across Russia’s Far East by thought leaders from South Korea, was already in the works when 2015’s Peace Odyssey came to a close.

In June 2015, a group of 31 leaders in politics, academia, media and culture made a six-day, 1,400-kilometer (870-mile) trip along China’s border with North Korea, stopping in cities and towns in the northeastern Liaoning and Jilin provinces to mark the 70th anniversary of the division of the Korean Peninsula.

This year, the odyssey kicked off on Aug. 8 in Vladivostok to explore the Russian Far East, which borders North Korea and China.

The team, larger than the previous year, included some 50 Koreans from the business, political, academic and legal realms, whose first stop in a six-day journey was the port of Zarubino in southern Vladivostok.

Zarubino is not far from Hunchun in Jilin Province, a vibrant trade center in Northeast Asia, and is used as the Chinese city’s access to the East Sea.

In 2014, the Jilin provincial government collaborated with Russian transport and logistics company Summa Group to build Northeast Asia’s largest port, which is expected to be able to handle some 60 million tons of goods annually.

The port was quiet, even deserted. A few fishing vessels could be spotted, but there were no ships sailing to the port, and no indications of construction work.

Russia has resisted China’s embrace. The Russian Far East is wary of Beijing in general. China’s northeastern provinces have a population of more than 100 million people, which could swamp Russia’s Far East, and its population of around six million.

“Zarubino is a strategic port with great possibilities for development,” said Eurasia infrastructure expert Ahn Byung-min, a senior researcher with the Korea Transport Institute, and a member of the Peace Odyssey group. “If a logistics depot is set up, it can become the largest port for Korea, China and Russia.”

However, Park Myung-lim, a political science professor at Yonsei University, argued during a bus trip, “What about it competing against North Korea’s Rajin-Sonbong project?” referring to a special investment zone currently under development by North Korea and Russia.

The Peace Odyssey group initially planned to visit Khasan in Khasansky District, southeastern Russia, which also borders North Korea and China. Access to this area, however, is strictly controlled, so that plan fell through.

The group had to settle with glimpsing Khasan from an observatory in Kraskino, Khasansky District, in Russia’s Maritime Province.

Luckily, the skies were clear.

“The place that song describes is this very place,” said Hwang. “Talk of joint development of this place began some 20 years ago, but it eventually fell through even though it is so close.”

Former Korean Ambassador to Russia Wi Sung-lak said, “This is largely due to external factors.”

This includes the deaths of North Korean founder Kim Il Sung and his son and successor Kim Jong-il, and western countries’ sanctions on Russia due to the Ukrainian crisis. They put a damper on cooperation among Seoul, Pyongyang and Moscow.

On the second day, the group headed to the Far Eastern Federal University on Russky Island, off the coast of Vladivostok, to hold a seminar. Russky Island is where the Asia-Pacific Economic Cooperation (APEC) leaders’ summit took place in 2012. It will host an Eastern Economic Forum scheduled for early September, which will be attended by President Park Geun-hye.

Russian President Vladimir Putin will preside over the annual economic forum, which kicks off Sept. 2 with the theme “Opening up the Russian Far East.” Security is expected to be extra tight.

Vladivostok city officials made every effort to help the Peace Odyssey group.

Around the time the trip to Russky Island was requested, the Korean government announced the deployment of a U.S.-led Terminal High Altitude Area Defense (Thaad) battery to South Korea, which has been stridently opposed by Beijing and Moscow.

Russian participants in the seminar expressed their grievances over the decision.

The next day, the group headed 90 kilometers north of Vladivostok to Ussuriysk, also located in the Maritime Province, and a symbol of cooperation between Korea and Russia. Korean shipbuilder Hyundai Heavy Industries runs a vast farm that cultivates corn, beans and oats in Ussuriysk.

While the farm can only cultivate crops for five months of the year because of the climate, it has been constantly increasing its production.

On the fifth day, the group flew to Khabarovsk, the second largest city in the Russian Far East. It is also one of the stops along the Trans-Siberian Railway, which departs from Vladivostok. Japan is considering linking its archipelago to the railway, as its northern Hokkaido Island is only 40 kilometers away from Russia’s Sakhalin.

Participants in the odyssey generally shared the notion that Russia’s Maritime Province should be embraced as “a land of opportunity” through such connections.

They share the idea that the region should be a land of opportunity for both Koreas, China and Russia.

Lee Seung-cheol, vice chairman of the Federation of Korean Industries, said, “The Amur River, signifies peace, as many rivers flow into it, and Northeast Asian countries, including North and South Korea, have to achieve a confluence of peace in this region.”

On the last day, the team took part in a seminar, pledging to put efforts toward a confluence of peace at Amur.

This may be difficult, taking into consideration the ongoing tough sanctions on North Korea for its continued nuclear and missile provocations. But some point out that roundabout ways can be at times quicker.