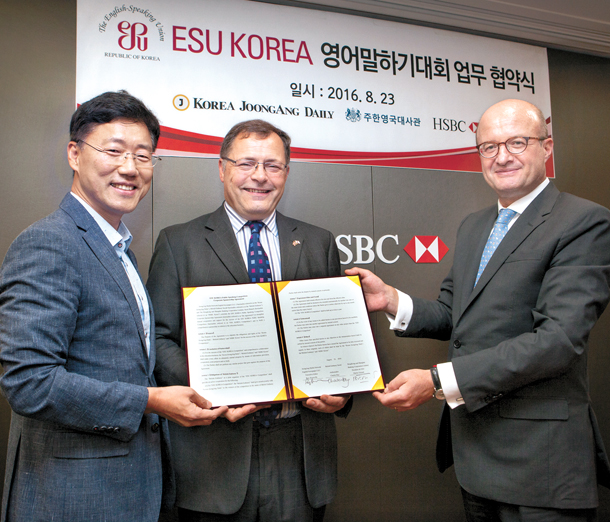 The agreement was signed four days before the final round of the 12th ESU contest takes place in Ajou University in Suwon, Gyeonggi. More than 1,000 students signed up, the largest number in recent years.

The contest, held biannually each year, is jointly hosted by the Korea JoongAng Daily and the British Embassy. HSBC Korea is the main sponsor.

All three parties agreed this week to make every effort to share information and cooperate for the competition’s improvement.

The British Embassy vowed to participate in evaluating the two Korean students who will compete to become the national representative for the international ESU contest, held in London.

The embassy also vowed to provide full support for the embassy tour program, provided to all contenders who advance to the final round.

The Korea JoongAng Daily promised to handle overall operation plans for the contest and play a key role in domestic promotion, while HSBC Korea solidified its responsibility as the chief sponsor.

For more information about the ESU KOREA Public Speaking Competition, visit www.esukorea.org or contact 02-2031-1295 or 1223.