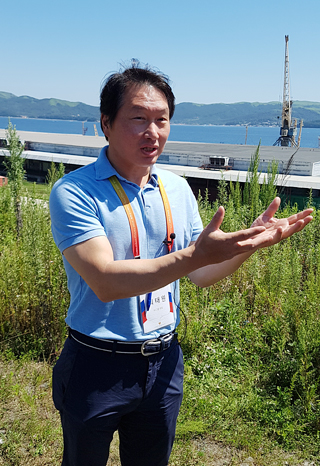 SK Group Chairman Chey Tae-won, overlooking the port of Zarubino in Russia’s Far East, 210 kilometers (130 miles) from Vladivostok, speaks of the potential in investing in the region earlier this month during the Peace Odyssey 2016. [RYU KWON-HA]

SK Group Chairman Chey Tae-won pointed to the “hidden potential” of investing in Russia’s Maritime Province, including the energy sector, adding that he is in the process of reviewing possible investments for the future of the Korean Peninsula.

“Looking at the medium- and long-term prospects of the Russian Maritime Province, there is a high potential for economic development,” Chey, who recently traveled Russia’s Far East during the Peace Odyssey 2016, told the Korea JoongAng Daily in his first interview with media since August 2015.

The Peace Odyssey took some 50 Korean leaders in business, academia, law, politics and media on a six-day journey across Russia’s border with North Korea and China between Aug. 8 and 13 in order to promote peace on the Korean Peninsula.

Chey highlighted a number of joint projects that have been discussed between Seoul and Moscow, such as the Silk Road Express, which envisions a railway line from South Korea to Europe via North Korea, China and Russia.

Other projects being reviewed include developing an Arctic route, resource development projects and possible investment in Russia’s advanced development territories.

He went on to emphasize the importance of building “trust and understanding between South Korea and Russia as neighbors.”

“I have worried over what peace on the Korean Peninsula in the future would mean for companies,” said Chey. “So I am putting effort into gaining insight and reviewing what role companies need to play in the process of achieving the larger dream of peace and harmony.”

However, he pointed out that no Korean company would invest in a regional expansion project just because the government requests it to, if the project itself promises no profits.

Q. What possibilities are there in investing in Russia’s Maritime Province?

A. It’s a land of opportunity. Opportunities have to be sought, but in reality, I think the conditions and environment are not yet ripe. Through further study and research, I will consider what sort of projects and investments are needed. What is important about investments… is thinking about how we can work together. Finding the suitable partner and industry, planning the type of investment, such components need to be researched.

Then are you more interested in the energy aspect?

It may appear that way, but it can be the opposite. Russia already has plentiful energy, so we have to wait and see what investments it wants.

In terms of business, what do you consider to be the appeal of Russia’s Maritime Province compared to other regions?

It is geographically close, and it holds possibility for the future in preparing for the era following the unification of the Koreas.

If the government asks companies to invest in North Korea, even though there is no profit, will you be able to do so?

Not just because the government asks.