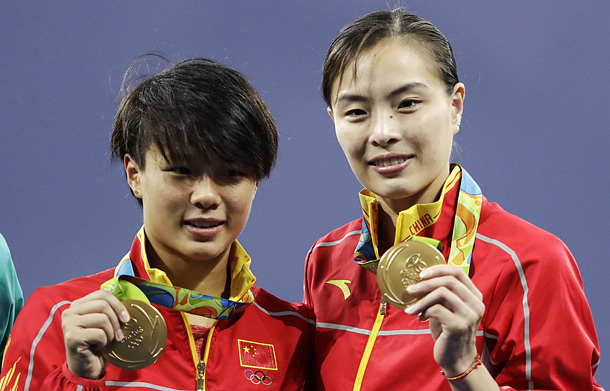 After Monday’s closing ceremonies, critics will have plenty of time to dissect all that went wrong with this year’s Games in Rio — from pool water that turned mysteriously and dangerously green, to empty stands, even for premier events. A different but no less agonizing debate is likely to take place in China. Just a few weeks ago, international and local analysts were predicting that the country would repeat its success as a dominant No. 2 in medal tallies. Yet after the final weekend, Chinese athletes are far behind their pace for gold in the last two Olympics — and came in third in the standings behind Great Britain.

For a country that’s long viewed success on the Olympic medal platform as a proxy for its international standing, the prospect is causing consternation. Earlier this week, Xinhua, China’s official news agency, tweeted the medal table and a horrified question: “Are you kidding me?” In truth, though, China’s Olympic slump may be something for the country to celebrate.

China’s rise as an Olympic superpower was as quick and unexpected as its economic renaissance. The 1984 Games in Los Angeles were the country’s first since 1952, and yet it managed to notch fourth place in a medal table that lacked the boycotting Soviet bloc. What made that result possible was a massive state-run athletic program launched in the 1950s. The goal was simple: Use the funds and power of the Chinese state to find the best athletes and train them up to world-class standards.

Over the years, China developed thousands of sports schools that accepted kids as young as four years old for training. Administrators scouted potential stars. The benefits could be considerable: China’s gold medalists are rewarded with large cash bonuses and even real estate.

At the same time, the downsides of the system were obvious. Young athletes were stretched, pulled and pushed to limits that verged on abuse. Parents are regularly kept far away from their kids, often for years. Worse yet, the “school” part of sports school is typically downplayed, leaving graduates unprepared for a life after sports. In recent years, there’s been a steady stream of stories about graduates who are destitute and unemployable.

At one level, the system worked handsomely, culminating in China’s record haul of gold medals at the 2008 Beijing Olympics. But even at its zenith, the central factor that made that success possible — a large pool of parents desperate for better opportunities for their kids — was disappearing.

Over the last five years, rural incomes have grown faster than urban incomes, while China’s falling birthrates — and greater economic opportunities — mean that Chinese parents are less willing to gamble their child’s future on the slim chance of Olympic success. The impact on China’s sports schools has been debilitating. As of May, there were 2,183 sports schools in China, producing 95 percent of the country’s Olympians. While that might sound like a lot, in 1990 there were 3,687 such schools. In just one sport — table tennis — enrollment has declined 75 percent since 1987.

Given the smaller set of athletes to choose from, and fewer schools in which to train them, China’s medal table was bound to fall off. This year, the Chinese gymnastics team — a traditional powerhouse — failed to produce a single gold medalist.

With luck, a disappointing medal tally could inspire the government to rethink its Olympic ambitions. China needs to find a way to open up its national teams to athletes who train outside of the state system. The surprisingly talented basketball players found at many downtown Shanghai parks not only lack access to high-school-level coaching, there aren’t any meaningful high school or college athletic programs in which they can play and be noticed by professional and national team coaches.

The good news is that China already has a model for how to fix some of the problem. This year, the government designated thousands of non-sport schools as “soccer academies,” where soccer-specific training will be available to students. The best prospects can then move up through the system to China’s burgeoning professional leagues and eventually the national team. While such schemes won’t work for every sport, they’re a start in the long-term process of spreading athletic resources and training more widely throughout schools and communities. Ultimately, that’s going to be the best way for China to cement its place atop the medal podium.