Turn off the lights in Sejong, please

Turn off the lights in Sejong, please 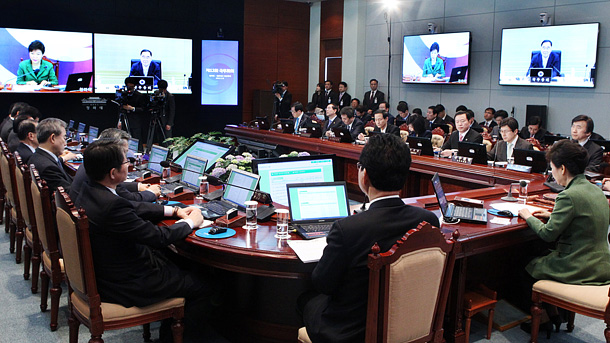 “As long as the lights at the Gwacheon Government Complex are on, the future of Korean economy is bright,” government officials used to say with pride when economy-related agencies were in Gwacheon. The offices have now moved to Sejong City, and the lights are rarely off.

The Ministry of Strategy and Finance is in Tower 4. Following the economic policy and tax reform announcement, officials are wrapping up the budget planning, and lights in their offices stay on night after night. In the morning, it is easy to run into officials who seem to have barely changed their clothes or had much sleep. It isn’t necessary to worry that officials have become slack since moving to Sejong.
So should we rest easy? Actually, it is a problem that they are too diligent. The typical product from all-nighters is the economic policy direction published every half-year. It is the legacy of the economic development era — something that can’t be found in other countries. But lately, they seem to have lost relevance.

Fundamentally, it does not make sense to address structural problems such as low growth and an aging population with a six-month prescription. Whenever a short-term plan ends, consumption and fiscal cliffs becomes more severe. It has become a routine to exceed the budget in the first half and plan a supplementary budget in the second. Every year, the tax law is amended, and it is ragged.

The overly ambitious and arrogant leadership is expressed in the policy. The progressive electricity billing system for households is the most notable. The Ministry of Industry, Commerce and Energy wants to invest the profit KEPCO made on new energy projects — instead of lowering the electricity rate. As they focused on planning grand investments, they didn’t notice how the citizens were exhausted from the heat.

I want to recommend the overworking bureaucrats take a vacation to Takeo, a small city in Kyushu, Japan, and stop by the municipal library. Three years ago, private company Tsutaya Bookstore turned the conventional library into a resident-friendly attraction. The books from storage are now displayed publically, and instead of the conventional decimal classification, books are categorized by lifestyle sections, such as cooking and living. Starbucks is in the library, and hosts, not librarians, welcome visitors. The municipal library in a city with a population of 50,000 has 1 million visitors annually. A young mayor who had worked for the Ministry of Internal Affairs and Communications accomplished the innovation.

In Korea, the economy has grown so big that a few officials cannot handle it, and the private sector has expanded greatly. The government must enhance productivity through innovation in the private sector. The bureaucrats should relax a bit. They shouldn’t feel they can’t leave the office early. As we all learned as students, all-nighters don’t necessarily lead to good grades.