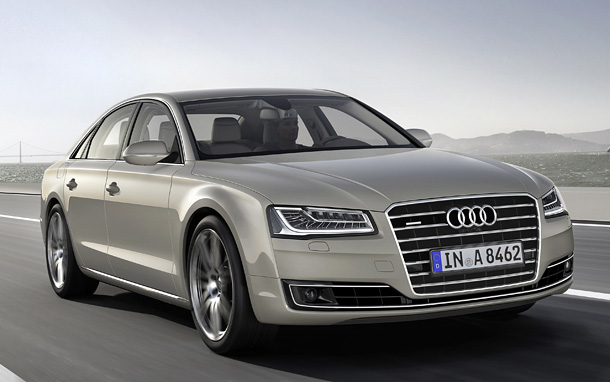 This recall is Audi’s first for its A8s flagship sedan after a Korean government investigation determined that a coolant control valve had a faulty design, which could cause it to lose power. The German automaker plans to recall the same model in other countries as well, beginning in the United States next week.

Audi is recalling the A8 4.2 FSI Quattro sold between July 16, 2010 and April 13, 2012, the Korean Ministry of Land, Infrastructure and Transport said Wednesday.

The Korea Automobile Testing and Research Institute began investigating the engine problems in September after the transportation ministry received complaints from vehicle owners that the engines cut off while they were driving, raising safety concerns. The institute concluded that coolant was directly flowing into the Electronic Control Unit (ECU), a crucial electronic component controlling the transmission and brakes.

“Because of the design fault on the cooling-water control valve, the leaked cooling water flows into the EUC connector that is directly connected, which caused a failure to the electrical supply on the fuel pump control wires,” said an official at the Transportation Ministry.

“As the fuel pump stops operating, the Engine Power Control warning light lit up and the car stopped in the middle of the road.”

Initially Audi was reluctant to issue a recall even after the Korean government’s investigation, insisting that there were no safety risks. The automaker maintained that the vehicle could run roughly one or two additional minutes after its fuel pumps failed to work and the warning light was illuminated. Instead, it has offered free public repairs since Feb. 26.

The government decided to order Audi Volkswagen Korea to recall the troubled vehicle on June 30, concluding that the engine problems threaten safety.

The automaker will repair recalled vehicles for free. But a manufacturer has to issue a notice of the recall in newspapers and report regularly to the government on the recall rate. Additionally the company also has to compensate owners who paid for repairs out of their own pockets within a year of the recall.

The recall comes at a time when Audi’s parent company Volkswagen has been under harsh public scrutiny for an emissions scandal that led to Korea banning the sales of 80 Volkswagen models including the Golf, the Polo and the Beetle, while revoking the certification of 209,000 vehicles and slapping the automaker with a fine worth 17.8 billion won.

This is not the first time that the Korean government has made a recall of imported brands with faulty problems that led to recalls in other countries, and previous recalls included the Passat B6 2.0 TDI and Mercedes Benz’s S63 AMG 4Matci as well as BMW 520d and 320d.