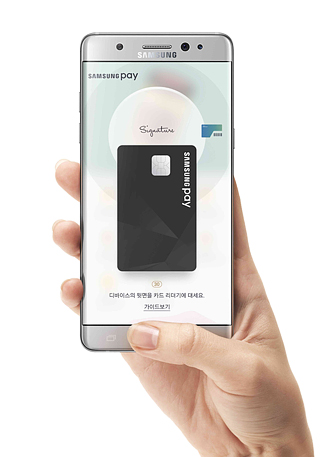 The service has expanded to six more countries, including the United States, China and Singapore, leading to some 100 million big and small transactions made through the app. It can be used only on Samsung devices.

When the service started in August 2015, the mobile payment service, which enables subscribers to make payments through the mobile app with fingerprint approval even if a customer doesn’t have a card, signed an exclusive contract with Woori Bank. It attracted 100 billion won in transactions within the first two months. The exclusive contract expired in March and now it has formed partnerships with Shinhan, KB Kookmin, IBK and NH Nonghyup banks.

Over the last year, Samsung Pay has expanded to collaborate with 440 banks worldwide as well as major global card companies including American Express, Union Pay, MasterCard and more.

In May, Samsung Pay linked with Alibaba, China’s biggest e-commerce platform, to use its mobile payment service Alipay in its app to bolster its global competitiveness.

The mobile app now offers diverse types of financial services such as depositing and withdrawing cash from ATMs, using it as a transportation card and making purchases online.

Samsung Pay said online transactions made through the app reached 500 billion won since the service became available this year, accounting for 25 percent of transactions.

Samsung Electronics also said the mobile payment service works with more than 4 million loyalty membership cards with retailers based in Korea and the United States.

Samsung is seen growing faster over competitor Apple Pay because Samsung’s smartphone reads magnetic cards, which are more commonly used in other parts of the world while Apple Pay only accepts near field communication payment systems.