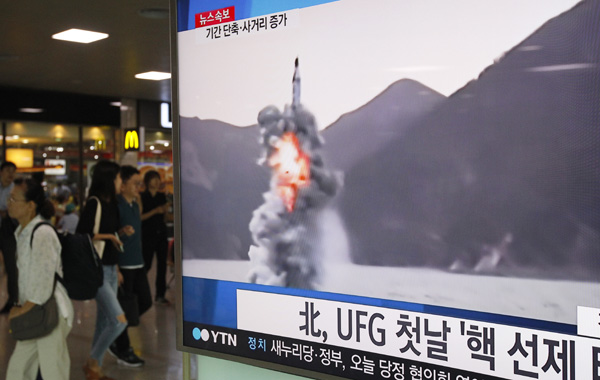 People pass by a TV news program showing file footage of North Korea's ballistic missile that the North claimed to have launched from underwater, at Seoul Station, Wednesday. North Korea on Wednesday fired a ballistic missile from a submarine into the sea in an apparent protest against the start of annual South Korea-U.S. military drills, Seoul's military said. [AP/NEWSIS]

Pyongyang test-fired its third SLBM launch this year from the eastern coastal city of Sinpo at around 5:30 a.m., where the North maintains its submarine base. The South Korean military said the missile flew about 500 kilometers and reached Japan’s air defense identification zone (ADIZ) before falling into waters controlled by Japan, a trajectory that shows the North has made strides in its SLBM technology over the past few years.

“North Korea test-fired one SLBM missile in waters near Sinpo in South Hamgyong Province at around 5:30 a.m. today,” said Seoul’s Joint Chiefs of Staff, “As the missile flew 500 kilometers, the launch this time appears to have progressed compared to the number of SLMB launches in the past. We are analyzing the latest launch jointly with the U.S.”

Experts say the latest SLBM launch can be considered a “success” since a 300-kilometer trajectory is the minimum requirement for a SLBM launch to be seen as such.

In the wake of the launch, the presidential office in Seoul convened an emergency session of the National Security Council at 7:30 a.m., about two hours after the North’s latest provocation. Pyongyang’s SLBM launch came 47 days after its last underwater missile launch on July 9, one day after Seoul and Washington announced on the deployment of the U.S.-operated advanced missile defense system in Seongju County, North Gyeongsang.

The July 9 launch, however, ended in failure as the missile exploded at an altitude of 10 kilometers shortly after taking off.

The Wednesday launch also came two days after Seoul and Washington kicked off the annual joint military exercise Ulchi Freedom Guardian, involving 25,000 U.S. service members alongside more than 50,000 South Korean troops. During the 12-day drill, which ends on Sept. 2, the allies examine wartime countermeasures in case of an attack by the North. Pyongyang balks at the annual drill, calling it a war rehearsal, and on Monday warned of a pre-emptive nuclear strike against it. The allies refute the claim and say the exercise is purely defensive in nature.

Pyongyang’s pursuit of the sea-based missile system was evident by the string of SLBM launches it has conducted over the past two years.

The South Korean military estimates the North will complete its SLBM tests and deploy the weapon to units in two to three years, which will enhance the country’s pre-emptive strike capability as it is difficult to detect a submarine underwater. The worst-case scenario would be for the North to master the technology needed to miniaturize a nuclear warhead small enough to mount on top of a submarine-launched ballistic missile.