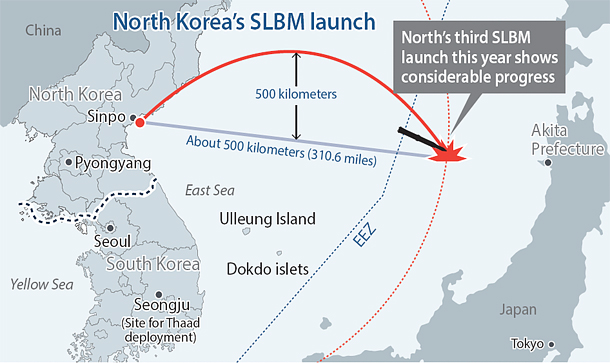 Pyongyang test-fired its third SLBM this year from the eastern coastal city of Sinpo at around 5:30 a.m., where the North maintains a submarine base. The South Korean military said the missile flew about 500 kilometers and reached Japan’s air defense identification zone (ADIZ) before falling into waters controlled by Japan.

“North Korea test-fired one SLBM in waters near Sinpo in South Hamgyong Province at around 5:30 a.m. today,” said Seoul’s Joint Chiefs of Staff, “As the missile flew 500 kilometers, the launch this time appears to have progressed compared to a number of SLBM launches in the past. We are analyzing the latest launch jointly with the U.S.”

Experts say a 300-kilometer trajectory is the minimum requirement for a SLBM launch to be considered a success.

All previous SLBM tests have been considered failures.

A military source said the SLBM missile fired Wednesday appeared to have reached an altitude of 500 kilometers, meaning that it could have flown as far as 2,000 kilometers if the altitude had been adjusted to a normal level, which is about 150 kilometers.

“The missile soared as much as it flew,” said the official, who requested anonymity. “To fly 500 kilometers, a missile would just need to reach 150 kilometers in height. But apparently to show off that it was capable of sending it farther, the North seemed to have put the missile at a higher angle and therefore reduced its range (to 500 kilometers) intentionally.”

The military assessed that a missile capable of reaching 500 kilometers in altitude can travel up to 2,000 kilometers, far enough to target U.S. bases in Okinawa.

The apparent success on Wednesday indicated “an upgrade in the level of threat” by the North and its efforts to “diversify means of threat,” said Lee Ho-ryung, research fellow at the Korea Institute for Defense Analyses.

“From its repeated tests of SLBM launches, the North has improved its SLMB technology as well as its stability in execution,” continued Lee.

The defense expert told the Korea JoongAng Daily that what drives the North to pursue SLBM capability was an intention to diversify the means of its military threats. “By all means, the North wants to undermine the joint military capability of South Korea and the U.S. And it thinks having SLBMs is one way to do it.”

Another military expert said a missile fired from a submarine is virtually impossible to detect at the initial phase, which would prevent Seoul and Washington from striking pre-emptively at the origin of launch.

“For a land-based ballistic missile, the military could detect the launch movement and pre-emptively strike it. But in the case of an SLBM, tracking such movements beforehand for a pre-emptive strike is not possible.”

The South Korean military called the test a “serious challenge” to security on the peninsula and a violation of UN Security Council resolutions, which prohibit the North from developing ballistic missile capability.

In the wake of the launch, the presidential office in Seoul convened an emergency session of the National Security Council at 7:30 a.m., about two hours after the North’s latest provocation.

Japan reacted angrily to the SLBM test after the missile fell into its territorial waters. Prime Minister Shinzo Abe harshly criticized Pyongyang, saying the test posed “a grave threat to Japan’s security.” Abe called the launch an “unforgivable act that damages regional peace and stability markedly,” according to Reuters.

Pyongyang’s Wednesday launch came 47 days after its last missile test from underwater on July 9, a day after Seoul and Washington announced the deployment of the U.S.-operated advanced missile defense system in Seongju County, North Gyeongsang.

The July 9 launch ended in failure as the missile exploded at an altitude of 10 kilometers shortly after launch. The North’s first SLBM launch this year on April 23 was also a failure as it only flew about 30 kilometers before exploding.

Wednesday’s launch came two days after Seoul and Washington kicked off an annual joint military exercise called Ulchi Freedom Guardian, involving 25,000 U.S. service members alongside more than 50,000 South Korean troops. During the 12-day drill, which ends on Sept. 2, the allies examine wartime countermeasures in case of an attack by the North.

Pyongyang balks at the annual drill, calling it a rehearsal for invasion, and on Monday warned of a pre-emptive nuclear strike against it.

The allies refute the claim and say the exercise is purely defensive in nature.

Pyongyang’s pursuit of a sea-based missile system was evident by a string of SLBM launches it has conducted over the past two years.

The South Korean military estimates the North will complete its SLBM tests and deploy the weapon to units in two to three years.

But the amount of time to complete tests could be less than previously assessed, considering the North’s apparent success Wednesday, a military official said.

“Though it is premature to jump to a conclusion based on a single launch success, the pace at which the North is improving its SLBM capability is faster than we thought,” noted the official, who spoke on the condition of anonymity.

The worst-case scenario would be for the North to master the technology needed to miniaturize a nuclear warhead small enough to mount on top of a SLBM.

While Seoul sees the North’s latest SLBM launch as a clear violation of UN Security Council resolutions, it remains to be seen whether members of the Security Council will adopt a statement condemning the launch considering China’s current attitude.

Earlier this month, China insisted a statement on Pyongyang’s two ballistic missile include a denunciation of the deployment of the U.S.-led Terminal High Altitude Area Defense (Thaad) battery in South Korea, foiling efforts to produce a joint statement that would have unequivocally condemned the North.

As tensions flared with the SLBM launch, North Korea demanded a meeting of the UN Security Council to protest the Ulchi exercise on Tuesday in New York.

In a letter to the council president, North Korean Ambassador to the UN Ja Song-nam accused the two allies of “creating the danger of war,” with the annual exercise, according to AP.

Ja reportedly warned that if the multinational body once again ignored Pyongyang’s repeated calls for a meeting to address the joint drill, it would signify that the council had become “a political tool” of the U.S.