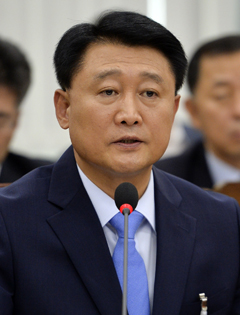 President Park Geun-hye formally appointed Lee Chul-sung as the new chief of the police on Wednesday, despite the National Assembly’s refusal to confirm the nomination because of his past traffic accident while under the influence of alcohol and attempt to hide his identity after the accident.

Park decided last month to promote Lee, the deputy head of the National Police Agency, to the role of police commissioner, a vice-ministerial post that oversees 150,000 police officers nationwide. Lee was the presidential secretary of public security from September 2014 to December 2015.

During the National Assembly’s confirmation hearing over the past weeks, a series of allegations against Lee was discussed, including his 1993 drunk driving accident.

“I was too confused and too embarrassed when I was investigated for the accident,” Lee told the Security and Public Administration Committee during the confirmation hearing on Thursday. “So I failed to identify myself as a member of the police at the time. Therefore, there was no record of disciplinary action over the accident.”

Lee made the admission as lawmakers demanded that he submit the record of the accident. At the time, he was working at the Gangwon Provincial Police Agency, and no casualties were involved in the accident.

Lawmakers from both sides of the aisle condemned Lee for having hidden his identity. They said Lee was able to receive promotions because of this omission, and opposition lawmakers demanded that Lee give up the nomination. Sources at the Blue House, however, said Park had no intention of recanting her selection because Lee had repeatedly apologized for the incident that took place 23 years ago, and because he was formally pardoned in 1995.

As the opposition Minjoo Party of Korea and the People’s Party refused to endorse the confirmation hearing report, Park requested the National Assembly to approve the appointment by midnight on Tuesday. Her request, however, was rejected by the opposition lawmakers.

Because the confirmation hearing is not binding, Park has the right to appoint the nominee at anytime if the legislature fails to endorse the report before the deadline she has set. Park then went ahead and appointed Lee as the new police chief on Wednesday.

The Minjoo Party’s floor leader, Rep. Woo Sang-ho, condemned Park’s decision. “After vetting the nominee poorly, the president decides to go ahead and appoint him despite protests,” Woo said. “The people will never forgive this.”