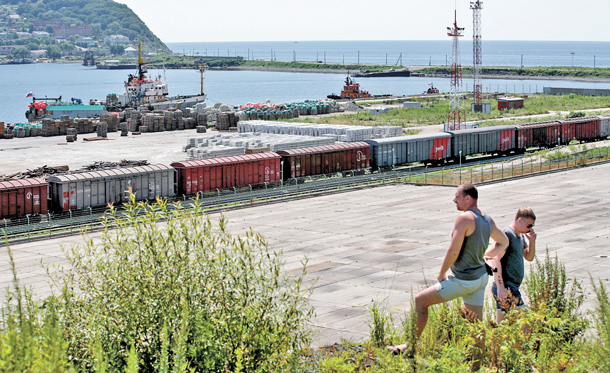 A view of the Zarubino port in Russia’s Maritime Province on Aug. 9, during the six-day Peace Odyssey 2016 taking Korean thought leaders across the country’s border cities and towns. A ferry, launched in 2000, once connected the port with South Korea’s Sokcho in Gangwon, but was discontinued in 2014. [KWON HYUK-JAE]

From an observatory in Vladivostok, a group of about four dozen Korean thought leaders marvel at the bustling waters off the coast of Russia’s Maritime Province on Aug. 8, on the first day of the Peace Odyssey 2016.

Zolotoy Rog, or the Golden Horn Bay, so named because of its shape, is densely lined with warships and merchant vessels. Even in winter, the port is said to be ice-free and its pacific beauty explains why Russia values it so.

A group of 47 leaders in business, politics, academia, law, media and culture made a six-day “Peace Odyssey” trip across Russia’s Far East, bordering North Korea and China, from Aug. 8 to 13. It is a follow-up to the inaugural odyssey in June 2015, a pilgrimage across China’s border with North Korea, from the Yalu to the Tumen River, to mark the 70th anniversary of the division of the Korean Peninsula.

Chung Eui-hwa, a former National Assembly speaker and one of the odyssey members, remarked, “I came here 10 years ago, but the city has completely changed.”

Though it has a small population of around 600,000, Vladivostok is fast becoming a vibrant gateway to Russia’s Far East.

In the evening, the group bused to the Mariinsky Theater by way of the Zolotoy Bridge, which was built just four years ago for the 2012 Asia-Pacific Economic Cooperation (APEC) summit, and is another indication of the city’s dynamism.

The theater, hosting a ballet company, was bustling with Korean, Japanese and Chinese visitors, and former Culture Minister Kim Jong-min pointed out, “In the past, it would have been unimaginable to view a ballet performance in the Far East.”

While the Russian Maritime Province has traditionally been known as barren land, such changes are indicative of Moscow’s new Far East policy.

While Russia is the largest country in the world, with an area of over 17 million square-kilometers (6.6 million square-miles), it has faced a decrease in population in its Far East, as well as an economic decline in the region.

To address such concerns, Russian President Vladimir Putin has pushed to spur development of this region.

In the year following the APEC leaders’ summit in Vladivostok in September 2012 the Russian federal government invested $21.3 billion in the region to modernize and expand its infrastructure.

Russia is pushing its Far East region as a key area of growth. This plan puts Moscow at the center of political, military and diplomatic affairs, while St. Petersburg will remain the cultural and judiciary center and Vladivostok will be the economic capital in the Pacific.

On the second day of the odyssey, the group headed by bus three hours south of Vladivostok to Zarubino port, which first opened in 1981 and is in the process of expansion.

Ahn Byung-min, a senior researcher with the Korea Transport Institute, said, “Zarubino is the contact point for the Korean Peninsula to connect to the Trans-Siberian Railway.”

As the port could be the gateway to North Korea, some in the group proposed Zarubino as the “2nd Kaesong Industrial Complex,” referring to the currently defunct symbol of inter-Korean economic cooperation.

Some scholars even point out that Zarubino holds better business potential than Kaesong.

Ahn continued, “There is a plentiful water and power supply, and the area is already constructed. More than anything, a work force can be drawn from Russians, as well as Chinese, Chinese-Koreans and North Koreans.”

Most of the group, including Hong Seok-hyun, chairman of the JoongAng Ilbo and JTBC, SK Group Chairman Chey Tae-won and former Korean Ambassador to Japan Shin Gak-soo nodded in agreement to this.

Kaesong was shut down on Feb. 10 following Pyongyang’s fourth nuclear test and subsequent long-range missile launch despite it being the last remaining vestige of inter-Korean cooperation.

Many diplomacy and security experts in the group, including Song Min-sun, former foreign minister and president of the University of North Korea Studies, emphasized the importance of resuming dialogue between the North and South and expressed regret at the lack of a breakthrough amid the current tensions.

The proposal to build the Russian Maritime Province as the 2nd Kaesong is not a new concept.

Since 2008, the South Korean and Russian governments have discussed economic cooperation projects to develop Zarubino port. Then-President Lee Myung-bak proposed a plan to develop the port and a logistics complex for Korean companies to Putin. While Russia was initially passive, Putin saw the plan as coinciding with his Far East policy and the two countries underwent negotiations that expanded to discussions on projects including railway, airport and roads.

In September 2011, the project to modernize Zarubino port kicked off, with plans to complete it by 2013.

President Park Geun-hye continued in this vein after she took office in 2013, proposing her version of this plan through the “Eurasia Initiative,” pushing for a vision of regional and economic cooperation between Europe and Asia.

Seoul is a suitable partner for Russia in the Far East region, which bordered China’s northeastern Liaoning, Jilin and Heilongjiang provinces that have a bustling population of some 1.1 million people. Likewise, Russia faces a territorial dispute with Japan over the Kuril Islands, or the Northern Territories. But the plan lost momentum following North Korea’s continued nuclear provocations, as well as the Ukrainian situation, which has resulted in Western countries’ sanctions on Moscow.

While Korean companies did not have much initial interest in an industrial complex in the Russian Maritime region before Kaesong was shut down, the situation has changed since.

The odyssey participants played with the idea of Korea providing the technology and capital, with Russia being the operator, which could naturally lead to the employment of North Korean workers. It is estimated that there are up to 20,000 North Korean laborers working in areas like logging or construction, in the Russian Maritime Province. “For there to be good cooperation, trust as fellow neighbors has to be built,” said SK Group Chairman Chey. “I hope the Peace Odyssey can be the first step in doing this.”