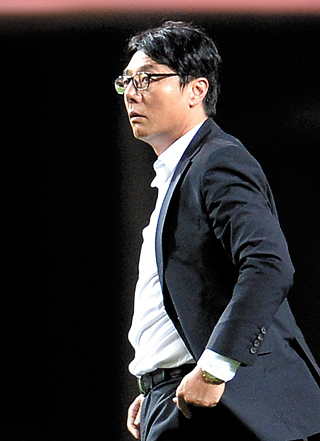 Park Chu-young celebrates his goal during the ACL quarters match against Shandong Luneng FC of China. Park added a goal and an assist. Park will travel with Seoul to China for the second leg of the knockout stage. [NEWSIS]

Hwang Sun-hong and his team, FC Seoul, came out with an impressive 3-1 win over Shandong Luneng FC of the Chinese Super League during the first leg of the Asian Champions League (ACL) quarterfinals on Wednesday at its home Seoul World Cup Stadium. After kicking off the knockout stage on an auspicious note, the question remains whether FC Seoul will be able to take the first ever ACL title in the club’s history, a title that has eluded the Seoul outfit since the establishment of the club in 1983.

The home crowds of FC Seoul on Wednesday witnessed what could possibly be the start of a history-making run. In the first leg of the knockout stage of the ACL, Dejan Damjanovic of Seoul scored the opening goal in the 19th minute when he found an empty space on the bottom right corner of Shandong’s goal and headed the ball in. Park Chu-young, who missed a golden opportunity in the first half when his shot went wide, made up for it by extending Seoul’s lead to two goals in the 31st minute, scoring his first goal at the ACL this year.

But Shandong quickly offset Park’s goal when Walter Montillo, a midfielder from Argentina, curled in a free kick at the 35th minute mark.

After the goal, the two clubs essentially went nip and tuck, constantly at each other’s necks with threatening attempts to tally additional goals. It would not have surprised fans at the stadium if Shandong equalized the match and the two came out with a draw.

But then came Carlos Adriano, the “the livewire striker,” as described by the Asian Football Confederation (AFC), from Brazil for Seoul.

A leading scorer of the ACL with eleven goals in his pocket in the past eight games, it was a sure thing that Adriano would be the key for Seoul to take the momentum of the game for itself. And by all means, putting Adriano in the game in the 60th minute of the game was a jackpot move by skipper Hwang. 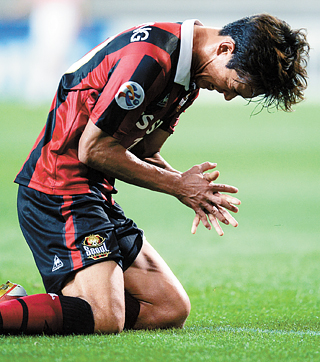 Nine minutes after he stepped onto the pitch, Adriano connected a back-heel pass from Damjanovic to extend Seoul’s lead to 3-1.

“We worked hard for this victory in front of our fans but the next step is to advance to the next stage,” said Hwang, according to the AFC. Hwang, who has taken over the managerial post in June after his predecessor left for a post at Jiangsu Suning of China, has seen his share of struggles and ordeals with the new team. But although the team struggled in early July, Hwang’s leadership style seems to have finally sunk in with the squad, not only in terms of its offensive style but also the meticulous and possession-centered style of football that Hwang has always emphasized.

Despite the win, however, Hwang remained cautious, saying that Wednesday’s win is only the first half of the two-game series of the quarterfinals. “It [the second game against Shandong] will be a difficult and different game and we will have to stay focused and be at our best to get the result we need. There is still a long way to go.”

Although Seoul has had success domestically, taking five titles in the K-League Classic and three in the Korean FA Cup, the best it has done in the ACL is when the club finished as runner-up in 2002 and 2013. Last season, the team went to the Round of 16 before it was eliminated by Gamba Osaka of Japan, who eventually went to the semifinals after defeating Jeonbuk Hyundai Motors, another club from the K-League, in the quarters

The next ACL quarters match between Seoul and Shandong is slated for September 14 at Jinan Olympic Sports Centre in Jinan, China.