Park is latest Korean dropped from the season

Park is latest Korean dropped from the season 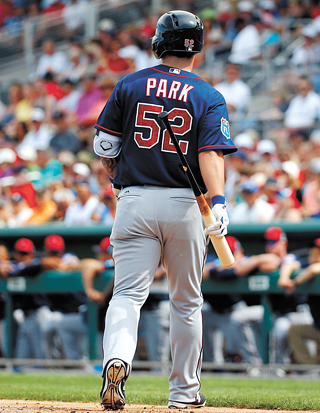 The first season of the Minnesota Twins’ first baseman and designated hitter Park Byung-ho at the MLB came to an end due to wrist injury. Reportedly, the injury has bothered the Korean slugger since the onset of the season. [AP/NEWSIS]

The Minnesota Twins’ Park Byung-ho will be out for the remainder of the season due to a nagging injury in his wrist, according to an MLB.com report.

MLB.com reported on Wednesday that “Park…had been dealing with an injured wrist throughout the season, but it worsened recently. Hand specialist Dr. Thomas Varecka will perform the operation.”

The 30-year-old first baseman had been one of the major deals signed straight out of the Korea Baseball Organization (KBO) last season, along with Kim Hyun-soo of the Baltimore Orioles. The two-time Korean league MVP award winner signed a $12 million contract with the Twins and has demonstrated the power he was known for in the Korean league earlier in the season, cranking out six home runs in the month of April alone. But his first taste of the Majors turned out to be more bitter than sweet as he went on a skid, struggling at bat after April. He batted .191/.275/.409 with 12 home runs and 24 runs batted during his 215 at-bats in 62 games for the Twins before he was demoted to the minors in late June.

After the Major League rookie was relegated to the minor league, he had an impressive start and maintained a positive outlook regarding his return to the big stage. In a 14-game stretch, Park has belted out nine home runs, proving his worth as a slugger. But his run again ended with another disappointing skid, going 4-for-39 towards the end before he got listed in the disabled list (DL) with wrist pain. With the Triple-A Rochester Red Wings, a minor-league affiliate of the Twins, Park hit .224/.297/.526 with 10 dingers and 19 RBIs in 31 games.

“It’s likely a torn ligament on the back of my hand,” Park said through his translator. “It hasn’t been bothering me seriously, but pain has been there and after I got sent down to Rochester the pain worsened and I thought it was about time I got it checked out.”

“It’s more in the back of the hand, and he’s got a tendon that is subluxing, which doesn’t sound like a good thing,” the Twins manager Paul Molitor was quoted as saying by MLB.com. “They think it’s the right way to try to address it. So he’ll stick around here for a month or so to rehab it before he heads home.”

Whether his struggle this season is the result of his lingering wrist pain, however, is questionable since it has been reported that the injury had been there since spring camp. But regardless of the pain and how his first season came to its conclusion, Park remains positive, as he always was in the KBO.

“It was a huge learning experience,” Park said. “I was told coming in it was going to be different, but facing those guys it was really, really different. But I learned a lot from it. I try to stay positive. Whether it was here or in Rochester, I took every day like it was a class. So now I know what I need to work on to prepare to come back strong next season.”

But now that Park is out of the season for good, the elephant in the room must be addressed. Namely, where did all the Korean major leaguers go?

At the onset of the season, there were eight Korean baseball players in the big league, including newcomers such as Park as well as veterans such as Choo Shin-soo of the Texas Rangers. But now, as of Thursday, there were only two Koreans spotted in the majors, Kim of the Orioles and Oh Seung-hwan of the Saint Louis Cardinals.

Kim had been on the team’s DL briefly in July but quickly came off the hamstring injury to rejoin the Orioles’ roster. Kim, who arguably had the most difficult start of the eight Korean big leaguers after he struggled on the plate during the exhibitions games and was almost demoted, is now a regular on the team’s starting roster. Like Kim, who continues to succeed, Oh is also moving up in the majors, and is now considered a key component if the Cardinals are going to see any success beyond the regular season. Since he replaced Trevor Rosenthal as the team’s closer, the “Stone Buddha” has continued to up his reputation as a capable fireman and is now with 12 MLB saves.

But other than these two, others are either plagued by injuries or in a slump. Choo of the Rangers is out for good this season due to a broken left forearm that required surgery. The veteran leadoff hitter has been afflicted by injuries all season, including to his hamstring and lower back, just to name a few.

Kang Jung-ho of the Pittsburgh Pirates is on the team’s DL due to a shoulder injury. He suffered the injury when he slid headfirst last Friday into second base during a game against the Miami Marlins. Kang will need at least two to four weeks for full recovery. Ryu Hyun-jin of the Los Angeles Dodgers, meanwhile, who missed the entire season last year due to a shoulder surgery, is once again out of the picture due to elbow surgery. Ryu made a brief return in July but is now expected to be out for the remainder of the season.

Other than those brought down with injuries, Lee Dae-ho of the Seattle Mariners and Choi Ji-man of the Los Angeles Angels are in the minor league teams of their respective clubs after poor showings in the top league.

Lee, who platooned with Adam Lind on first base and had secured his spot in the opening day roster with remarkable performances in the spring, had a problem with timing on the plate after the All-Star break last month. He then became a victim of a series of roster moves last week and was sent down to Triple-A Tacoma.

“I haven’t got my batting right,” Lee was quoted saying, according to the Seattle Times.

Choi of the Angels was optioned off to the Angels’ Triple-A affiliate, the Salt Lake City Bees, on Sunday. He had a swinging season this year, going back and forth between the majors and the minors. However, despite given chances, the 25-year-old was unable to tally any decent plays and hit only .167/.265/.353 with five homeruns and 12 RBIs in 43 games playing with the Angels.