As debt grows, so do concerns

As debt grows, so do concerns 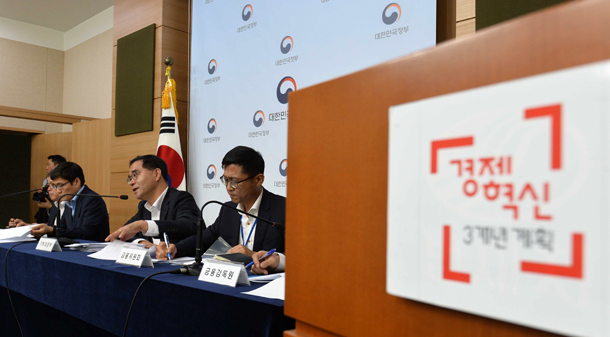 Is Korea’s debt situation critical enough for the government to try to curb the situation, especially when interest rates are so low and additional cuts are expected in the coming months?

Bank of Korea Governor Lee Ju-yeol recently raised the issue regarding the rapidly growing household debt and the impact it might have on the local economy.

“The rising household debt is something that shouldn’t be taken lightly,” Lee said Aug. 11 after the central bank’s monetary policy committee held the key interest rate at its lowest level of 1.25 percent.

“The speed at which the household debt is rising is faster than in previous years, it is becoming a risk factor in the perspective of the financial [market] stability. 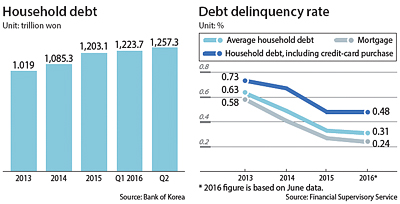 “It is also true that although the government has taken several actions [in curbing the growth of household debt], no visible results have been made.”

Household debt, including credit card purchases and unsecured loans, reached a high of 1,257.3 trillion won ($1.13 trillion) at the end of June, the Bank of Korea said. Such debt has continuously broken records for more than three years.

Last month, there were 5.8 trillion won in new mortgages, the largest amount borrowed in a month this year, thanks to the reviving housing market. As a result, fresh household debt, which excludes credit card purchases, as of last month also reached a high this year as new loans in a month reached 6.3 trillion won.

The Financial Supervisory Service banks, including commercial, regional and special purpose banks, have reached 75.9 percent, or 28.3 trillion won of the loans that they were targeting to give in the first half, a recent report from Minjoo lawmaker Park Yong-jin said.

This means that their loan businesses have already achieved their targets for the year.

Special purpose banks have hit 87.1 percent of the 6 trillion won target they have been seeking.

That figure is expected to rise in the second half if momentum continues.

“Usually the 40 percent of newly borrowed loans are made in the first half while the remaining 60 percent are borrowed in the second half,” said Park, who is on the National Policy Committee.

“Considering the achievement made in the first half by the end of the year, the banks will enjoy 190 percent increases on their annual target.”

The BOK has raised concerns over the possible quality deterioration of the loans.

Although the Korean central bank agrees that debt has a positive influence on the economic expansion such as increasing consumptions that would lead to growth of the domestic market but considers the current momentum as excessively fast.

Particularly the central bank has pointed to the exceptional growth in nonbanking institutions as a major risk as most consumers are not borrowing to invest but rather are lower-income households spending on necessities.

“If the loan borrowed from the nonbanking financial companies [with higher interest rates] is for food and living expenses, it could be a problem in worsening the quality of the debt,” said a BOK official.

Additionally, even if new mortgages have a low delinquency rate, there is growing concern over the risks that follow with an excessive supply of housing units, an issue that has been raised since the second half of last year.

An oversupply of apartments could bring down home prices, which also means that those who borrowed mortgages or syndicated loans could become unable to repay their debt, leading to a massive selling of apartments for far below the purchase price. This could affect the overall economy, as people won’t be able to spend, burdened by their debt payments.

Until now the government, including the Financial Services Commission, has argued that the current growth will not lead to major risks. In fact, the delinquency rate of household debt has been improving.

As of June this year, corporate loan delinquency has worsened especially for conglomerates.

Conglomerates’ delinquency rate rose to 2.1 percent, a new record while the delinquency rate of small and midsize companies fell 0.24 percentage points from the previous month to 0.71 percent. Loans borrowed from conglomerates roughly accounts for 22 percent of the 742.9 trillion won corporate loan balance.

On the contrary loan delinquencies have fallen. As of June, the household debt delinquency rate was 0.31 percent. Not only is this a drop from 0.36 percent in January but also an improvement from three years ago, when the rate was 0.63 percent. The situation is the same whether the delinquency rate is either mortgages or on the 1,250 trillion won debt including credit card purchase.

“The low interest rates [on loans] and the favorable sentiment in the real estate market, which were the cause to the steep rise of household debt, will likely continue,” said Kim Eun-jin, a Shinyoung Securities analyst. “With the currently two-digit growth in household debt, it is likely that such debt would amount to 1.32 trillion won by the end of the year.