The Starship Enterprise has landed - in New York

The Starship Enterprise has landed - in New York 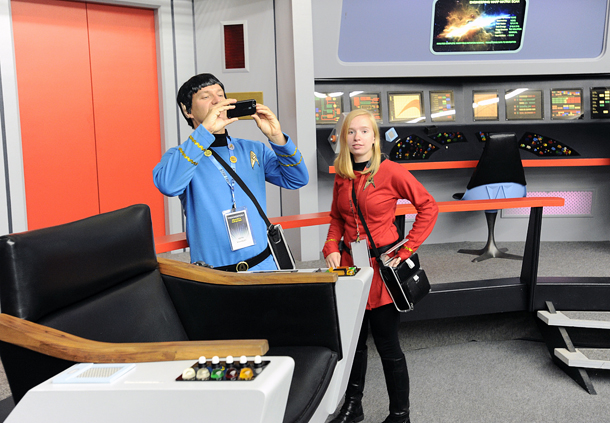 Keith Schubert, left, of Peru, N.Y., dressed as Star Trek’s Mr. Spock, and his daughter Tiffany, right, dressed as a crew member, take photographs during a tour of the replica starship Enterprise from the original “Star Trek” series during the Trekonderoga festival in Ticonderoga, N.Y. [AP/NEWSIS]

TICONDEROGA, N.Y. - On its many voyages through space, the Starship Enterprise has endured bridge-shaking blasts from enemy ships and infiltration by scheming aliens. Now it’s being invaded by tourists.

Sets mimicking those of the 1960s TV series “Star Trek’’ - including Capt. Kirk’s bridge, sick bay and engine room - were built by fans for an internet film series produced in this Adirondacks mountain town and are now open to paying customers who just can’t get enough of the 50-year-old franchise.

“The entire set ... how close it is to the actual TV show, you feel like you’re really there,’’ said 16-year-old Tiffany Schubert of Peru, New York. “It makes you just want to be in the show and have the same experience - being attacked by aliens, as bad as that is.’’

Schubert wore a red Starfleet shirt during a guided tour on a recent Star Trek convention weekend with her father, who came dressed as Spock. They heard a red alert, stood on transporter pads (dad gave a live long and prosper hand sign) and poked around the bridge.

James Cawley, a 50-year-old Elvis impersonator, began the years-long process of building the sets in 1997 after inheriting a copy of the original Enterprise blueprints from a costume designer on the original show.

Cawley and fellow fans released their first “Star Trek: New Voyages’’ web film in 2004, with Cawley portraying Kirk. Cast members call what they do “playing Star Trek,’’ but the production values became quite high, with some episodes involving up to 200 people and attracting original “Star Trek’’ actors George Takei and Walter Koenig (reprising their roles of Sulu and Chekov, respectively.)

“It was a fun little lark, and it just exploded,’’ said Cawley, who produced 11 full-length episodes, which have so far garnered more than a million views.

They were pioneers in the flourishing culture of Star Trek fan films. But the atmosphere in their little universe chilled in December after Paramount Pictures and CBS Studios filed a copyright infringement lawsuit against the makers in California of a planned fan film that raised more than $1 million on crowdsourcing web sites. Six months later, the companies - calling themselves “big believers in reasonable fan fiction’’ - released guidelines on how fan filmmakers can avoid objections, such as not raising more than $50,000 and keeping individual episodes to under 15 minutes.

Though he was never sued, Cawley felt it was a good time to move on.

Opening the sets to visitors became a way to keep the fans coming. He obtained a license from CBS Consumer Products and opened the doors of a former dollar store this month. Adult admission is $24.30.

Ticonderoga, near the Vermont border, is far from a big city. But Cawley hopes to benefit from seasonal tourism in the Adirondacks, historic Fort Ticonderoga and nearby Lake George.

Marybeth Ritkouski, a fan-film veteran working as a tour guide, said visitors have had emotional reactions after they walk through the sliding doors and onto the set. One man actually wept. She thinks people still connect so deeply with the show dating to 1966 because it was so hopeful.

“The appeal of Star Trek always was that it imagined a far, far better future than maybe what we’re actually building for ourselves,’’ she said. “And I think it’s something people want to believe in and want to see come true.’’ AP