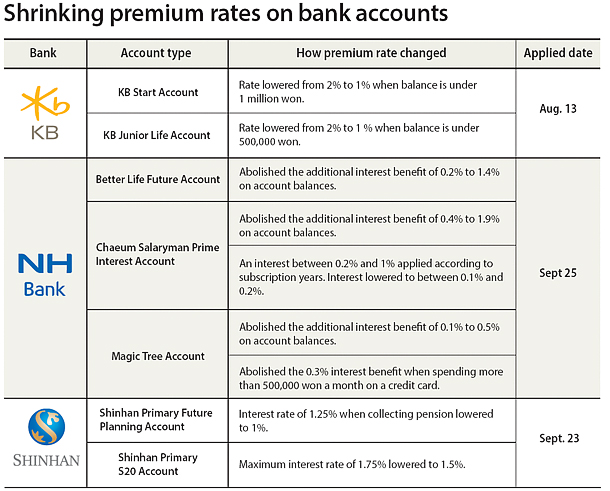 Kim Sang-jin, a longtime customer of NH Nonghyup Bank, recently received a text message notifying him that starting Sept. 25, the interest rate on his Chaeum Salaryman Prime Interest checking account would be significantly lowered from 1 percent to 0.2 percent and the additional benefits he had been receiving for his high account balance, between 0.4 and 1.9 percent, would be completely removed.

“The cut on the interest rate is too much that I’m considering switching to another bank,” Kim said.

But NH Nonghyup isn’t the only one scaling down its premium benefits for clients with interest-earning checking accounts and other deposit accounts. It’s a phenomenon happening to banks across the country as the central bank’s record-low key interest rate has affected their profitability.

One of the first to scale back its benefits was KB Kookmin Bank. On Aug. 13, the bank lowered the interest rate offered on its KB Start and KB Junior Life accounts from 2 percent to 1 percent.

“As the lowering of the key interest rate by the central bank has continued for a long time, we have decided to lower the premium rate [offered on accounts],” a KB Kookmin official said.

While KB Kookmin may have made the first move, NH Nonghyup has been making the most drastic cuts, especially since the bank suffered a huge deficit in the first half of the year.

Not only has it gotten rid of the interest rate applied on high checking account balances, but the bank has also ended its premium interest benefit offered to customers who spend more than 500,000 won ($450) a month on their credit card.

“Even with a checking account, if the conditions were right, we were giving out interest of 2 percent, and we thought the benefits were excessive,” an NH Nonghyup official said. “As the low key interest rate situation prolongs, we have decided to set our premium interest rate at the same level as other banks.”

Shinhan Bank has also been cutting back the interest benefits given to clients on its Prime Future Planning and Prime S20 checking accounts, which the bank heavily promoted last year after the government began allowing people to move their primary accounts between banks.

“We have been mulling over the idea of lowering our interest rates since [the Bank of Korea] lowered the key interest rate in June,” a Shinhan official said.

While NH Nonghyup alerted clients of its interest rate changes via text message, KB Kookmin and Shinhan only posted the news on their websites, leaving many customers in the dark about their lowered benefits.

Currently, financial institutions are required to post a notification at their branches as well as on their website for at least a month when making changes to the interest offered on deposit accounts including checking accounts.

However, they are not obligated to notify clients via email or text message. And since contracts on accounts often state that the interest rate can be changed by the bank whenever it sees fit, the bank is free from any accountability on losses that clients face from the changed rate.

Such rate cuts are starting to anger loyal customers, who opened interest-earning accounts after comparing different products in hopes of making a little bit more during a time of record-low rates.

One anonymous customer on an online forum specializing in financial investments said he was considering changing his primary bank as interest rates on his checking accounts had dropped too much, adding that if it weren’t for the online forum posts about the changes, he might not have known about them.

Although switching banks is free, a customer has to undergo the painstaking process of transferring all automated payment settings to the new account.

There have also been complaints that a one-month notification period of rate changes is too short of a time. Credit card companies have to notify their clients of any benefit changes six months before their implementation.

“The sales strategy of banks is attracting customers by using premium interest rates as bait and then stealthily reducing the benefits,” said Kang Hyung-koo, an official at the Korea Finance Consumer Federation.

“When opening up a bank account, the bank should tell you that the rate could change any time and send a text message two to three months ahead of the change.”