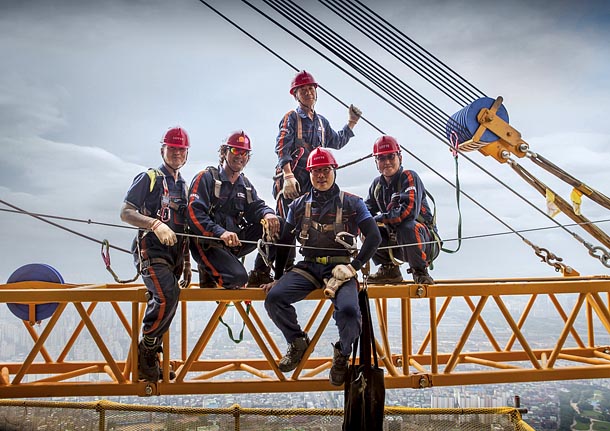 Workers of Lotte Corporation, which oversees the construction of Lotte World Tower in Songpa District, southeastern Seoul, at the construction site of the building. The company will provide a free concert to on-site workers at the newly-opened Lotte Concert Hall in the tower on Sept. 21 to thank them for their hard work on the project over the past six years. [LOTTE CORPORATION]

Lotte Corporation, which is overseeing construction of the Lotte World Tower in Songpa District, southeastern Seoul, will hold a special classical music concert for the site’s 1,800 workers and their family members.

The company said it wants to show appreciation for the time and effort that workers have put into the development project during the past six years, which is expected to be fully completed by the end of this year.

The 90-minute orchestra concert will be held on Sept. 21 at the recently-opened Lotte Concert Hall occupying the eighth to 10th floors of the tower’s Lotte World Mall.

Renowned classical masters will take the stage during the first half of the concert to perform some relaxing notes for the audience. The second half will feature more vibrant music accompanying a slideshow of photos showing the workers on site. The company will also share online letters of appreciation submitted to Lotte Corporation’s social media accounts.

During intermission, there will be free draft beer and refreshments that the audience can enjoy on the open-air terrace just outside the concert hall.

Lotte Corporation will also give away vouchers to attendees for entry to the tower’s observatory and a free stay at its six-star hotel when the building is completed.

The Lotte World Tower, which broke ground in November 2010, is expected to rise to 555 meters (1,820 feet) and consist of 123 floors when it is fully completed, making it the tallest building in Korea and the fifth tallest in the world. The project was the brainchild of Lotte Group founder Shin Kyuk-ho, who sought to establish a dominant landmark in Seoul and turn the surrounding Jamsil area into a tourism magnet.

The lower levels of the building consisting of the mall have gradually been opened to the public since 2014.

“We greatly appreciate the workers who are making history at the construction site and their family members who have supported their work,” said Park Hyun-chul, senior managing director at Lotte Corporation. “The concert is a gift from us that is intended to heal these hardworking employees.”