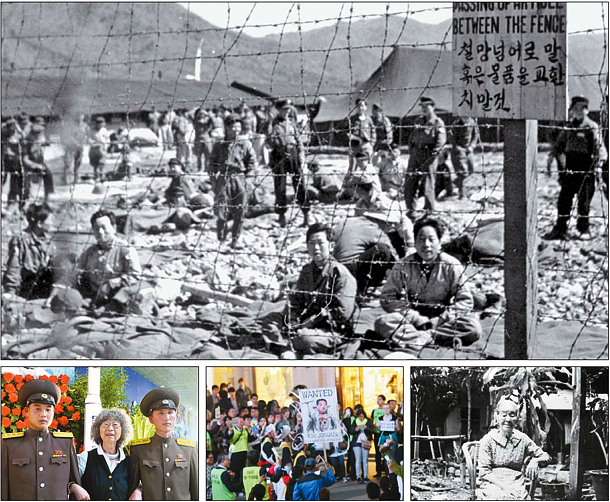 Stills from documentary films that will be screened at the upcoming 8th DMZ International Documentary Film Festival. Clockwise from bottom left: “People Are the Sky,” “One Warm Spring Day,” “Karayuki-San, the Making of a Prostitute” and “Yellow Wind.” [DMZ INTERNATIONAL DOCUMENTARY FILM FESTIVAL]

About 100 or so film festivals are held throughout the year across the nation, according to the Ministry of Culture, Sports and Tourism, but DMZ International Documentary Film Festival surely is unique among a sea of similar events as it is held inside the Korean Demilitarized Zone, also known as DMZ.

On the long strip of land designated a buffer zone when the South and the North agreed upon ceasefire after the Korean War (1950-53), the annual film festival holds an opening ceremony and screens an opening film themed on peace and life at Camp Greaves, located inside the DMZ.

The festival venue itself is intriguing enough to catch the attention of people because the area is normally off limit to civilians.

The camp was used as a base camp for the 506th US Second Infantry Division for about 50 years after the ceasefire agreement and was returned to the Korean government in 2007.

In its eighth year, the DMZ festival kicks off on Sept. 22 and runs through Sept. 29 at theaters located around Paju, Goyang and Gimpo, all in Gyeonggi.

“The biggest concern for us every year is growing the documentary film audience,” said actor Cho Jae-hyun, who serves as the executive director of the DMZ festival, during a media event held last week in central Seoul.

As part of its effort to add mass appeal to those who are not interested in documentaries, Park Hye-mi, who is in charge of selecting films for the festival, said, “There will be a lot more documentaries regarding popular culture and familiar places. For example, we have plenty of documentaries about music, history and art,” she said.

This year, 116 films, including features and shorts, from 36 countries will be screened at the festival.

The festival also added a new category called “DMZ Vision” this year. The category will be a good introduction for those who are unfamiliar with the DMZ documentary film festival.

Of the six films which make up the DMZ Vision category, “People Are the Sky,” is the work of Dai Sil Kim-Gibson who was born in North Korea but moved down to the South before the Korean War broke out and left for the United States later for study.

She visited North Korea twice between 2013 and 2014 and portrays the life of ordinary North Koreans through “People Are the Sky.”

Cho Hyun-jun’s “Yellow Wind” is a documentary about young North Korean defectors in their 20s and 30s who struggle to adapt to their new life in the South. The young defectors appear on cable TV shows or go overseas after they earn internship opportunities.

“One Warm Spring Day” is also in the DMZ Vision category and is the opener for this year’s film festival.

“We spend a great amount of time selecting an opening film every year because it is not easy to find one that is in line with our own identity,” said Cho. “This year, we present ‘One Warm Spring Day’ by Jeong Su-eun.”

The director zooms in on her personal family history as she traces the history of her grandfather who took his own life.

“I really wanted to present this story to young people who don’t know much about the Korean War,” added Cho.

A series of documentaries about Asian women who were forced to work as sex slaves for Japanese soldiers will be screened as well.

Of the seven documentaries, “Karayuki-San, the Making of a Prostitute” is will be shown to Korean audiences for the first time.

The documentary produced in 1973 in Japan is a story about Kikuyo Zendo, a 73-year-old woman who worked as karayuki-san or a Japanese prostitute, who was sent to countries in Southeast Asia to serve Japanese soldiers during the World War II.

For more information about the film festival, visit http://dmzdocs.com. (Korean only)

All tickets are priced at 5,000 won ($4.5) and online reservation is also available at http://www.megabox.co.kr.