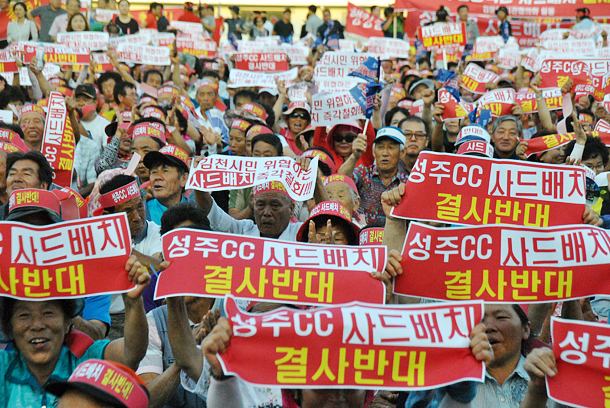 Around 7,000 residents of Gimcheon, North Gyeongsang, stage a rally on Wednesday to oppose the deployment of a Terminal High Altitude Area Defense battery as the National Defense Ministry considers an alternate site located near the city. [NEWSIS]

The brouhaha at the rally in Seongju County, North Gyeongsang, against the government decision to deploy the U.S.-led antimissile defense system there took hold of neighboring Gimcheon City on Wednesday as thousands of residents gathered at a local sports complex to protest the possibility of having the defense system in their backyard.

“Cannot care for Thaad that scares,” read a placard hung on the side of a road leading up to a sports complex in Gimcheon’s Samrak-dong, using the acronym for the antimissile defense system, the Terminal High Altitude Area Defense.

Some 7,000 participants gathered at the complex on Wednesday, holding placards that read “No resident agreement, no Thaad,” and “Scrap Thaad deployment that threatens the lives of Gimcheon.”

Many were wearing red handkerchiefs around their heads that read, “Absolute opposition to Thaad deployment in Seongju Country Club.”

It was after reports came out that the Ministry of National Defense may be considering the Lotte Skyhill Seongju Country Club as a possible alternate site for the Thaad system that protests began in Gimcheon, as the country club sits only a few kilometers from the city where some 140,000 people live.

Residents fear that having the Thaad system nearby will not only make them the target of a North Korean attack, but that the electromagnetic waves of the system will harm residents and local produce, a market that many rely on to make a living, although Seoul and Washington say there is no risk.

“They say even bees die within a 5.5-kilometer (3.4-mile) radius of the Thaad radar,” said Kang Jae-mun, a grape farmer in Nongso-myeon, Gimcheon. “If the government decides to deploy the defense system near Gimcheon, then I am going to have to give up my farming.”

Seoul and Washington announced last month the decision to deploy the Thaad system in Seongju to strengthen bilateral missile defense systems on the peninsula, given the North’s continued ballistic missile development.

An artillery base in Seongsan-ri of Seongju was the first site considered by the two governments. Facing weeks of strong resistance from Seongju residents, which began with protestors pelting the prime minister with eggs and signing letters written in human blood, President Park Geun-hye and the Defense Ministry agreed to consider an alternate site in Seongju.

The Seongju County Office has since given its official consent to having the Thaad system in Seongju, as long as the Defense Ministry can pick a suitable alternate site in the county remote from residential areas.

“The Seongju golf course is in my backyard,” said a Gimcheon resident participating in the rally with his teenage son. “The government encouraged us to move to this city and promised to help us settle down, but now look what they’re asking us to live with - a radar base?”

Still, the rally was held in an organized manner, like the ones led by Seongju residents. Rally participants handed out blue ribbons to help prevent external parties from trying to join in and possibly take over.

The organizers also decided to skip a mass march for fear of possible injuries. Instead, the residents sat in groups, 22 in total, organized according to residential areas.

“The residents hereby pronounce their complete and utter opposition to the deployment of the Thaad system, which threatens the life and safety of citizens,” announced a member of a local civic committee leading the rally. “We must put a stop to the fluctuating government policies that are only inciting regional conflict and destroying the local economy.”

The statement was followed by a group head shaving, a common sign of protest in Korea.

“I will do all that I can to protect the citizens’ life and assets from harm,” said Gimcheon Mayor Park Bo-saeng before shaving his head. His act was followed by five co-chairs of the civic committee.

Yet a ripple of anger broke through the crowd when Saenuri Party Rep. Lee Cheol-woo stepped onto the platform.

“I will protect both South Korea and Gimcheon,” Lee promised in front of the rally participants.

Someone threw a water bottle at the platform and the crowd booed.

Lee had earlier in the day said, “Thaad is not an issue that can be discussed with the residents,” at the National Assembly.

According to the Defense Ministry, a Korea-U.S. joint task force will be evaluating six criteria - including operational capability, flight safety and the cost and time it will take to deploy the system to the location - in reviewing feasible alternate sites within Seongju. Other possible sites to be reviewed include Mount Kkachi in Suryun-myeon and Mount Yeomsok in Geumsu-myeon.