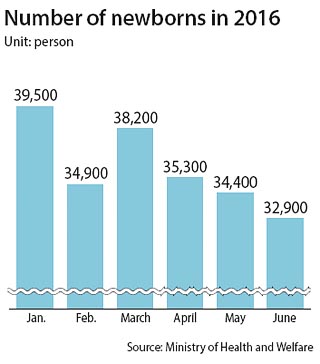 After spending hundreds of trillions of won over a decade to boost its birthrate, Korea may see its lowest-ever number of newborn babies this year.

So the government is trying a different approach.

The Ministry of Health and Welfare Thursday announced polices to offer financial support to all infertile couples and increase paternity leave pay alongside supplementary policies to help boost the national birthrate. The new polices will cost 61 billion won to 65 billion won ($54.6 to 58.2 million).

“Getting over the severely low birthrate is the No. 1 government priority, as the president emphasized recently,” said Minister of Health and Welfare Chung Chin-youb. “The working age population of this country will drop by 7 million people in 20 years, which is twice the speed that Japan is experiencing in the drop of its working age population.”

Additionally, the number of births per woman over a lifetime dropped from 1.24 in the second quarter of last year to 1.16 this year. In other words, couples in Korea are getting closer to having only one baby as a norm.

The Health Ministry plans to increase the average lifetime fertility rate to 1.5 births per woman by 2020, which means there needs to be at least 20,000 additional births next year compared to this year.

To accomplish this, the ministry will be offering infertile couples financial assistance regardless of their income from next month. Previously, only couples earning less than 5.83 million won a month were able to request government funding for fertility treatment.

According to the ministry, this change in policy will enable as many as 96,000 people to receive financial help, nearly twice the current 50,000.

“If some 30,000 more people receive the treatments,” Health Minister Chung said, “the ministry expects some 10,000 babies will be born.”

But it’s not that simple for some struggling couples.

“I’ve already received more fertilization treatments than can be covered by the government,” said a 39-year-old woman surnamed Jung, who received six fertility treatments. “Counting the tests before the treatment, the treatment itself and medicines, it costs 6 million won each time. I’m broke.”

“I had to quit my job to receive fertilization treatments,” said a 36-year-old surnamed Jeong, who has been receiving treatments for the past seven years.

Government assistance for fertility treatment is limited to three rounds, which will be extended to four from next month for couples who earn less than 3.16 million won a month. They will be reimbursed 2.4 million won per treatment.

Additionally, the ministry will extend the government-issued paternity leave pay to 2 million won per month for fathers taking care for all new children except the first.

Fathers currently receive between 500,000 won and 1.5 million won per month for paternity leave for kids beyond the first. The measure comes into effect in July 2017. But some working parents remain skeptical.

“If women already have a hard time taking maternity leave, it’s not hard to imagine how much more difficult it will be for the men,” said a 34-year-old working mother surnamed Kwon. “Increasing the pay is important but it’s far more imperative that the government provide policies and an environment in which parents feel comfortable taking leave for their children.”

“The birthrate initiative of the past 10 years did not work,” said Cho Young-tae, a professor at Seoul National University Graduate School of Public Health. “The government has to see the bigger picture and address problems young couples face in their careers [that discourage them from having children.]”