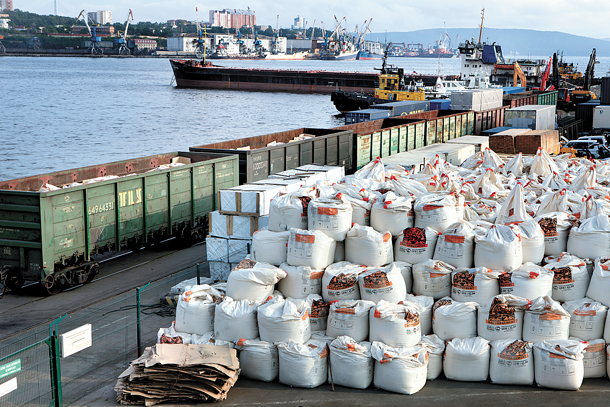 Grain sacks are stacked at the Vladivostok port, and freight car tracks connect straight to the edge of the bustling harbor on Aug. 9, the second day of the Peace Odyssey 2016, which took four dozen Korean thought leaders across Russia’s Far East. [KWON HYUK-JAE]

“Many Korean companies are high-tech,” said Lee Seung-cheol, vice chairman of the Federation of Korean Industries, weighing in on the business potential in the Russian Maritime Province during the Peace Odyssey 2016 trip that took Korean thought leaders across this region. “But now is the time to seize this high chance.”

Lee was a part of a group of nearly 50 business, political, academic, legal, media, cultural and literary leaders that made a six-day “Peace Odyssey” pilgrimage across Russia’s Far East, bordering North Korea and China, from Aug. 8 to 13, to contemplate peace, progress and unification in the region.

In an era of oversupply, many Korean companies are only looking into high-tech projects. But these members see new potential in the Russian Maritime Province, a region that suffers from supply shortage.

Lee points out that the region has a lot of opportunities. Russia, which still has vestiges of state capitalism, still sees a trend of a lack of industrial products. A lot of grain is produced in its vast land, and its agricultural produce is quite cheap. But in contrast, industrial products, including household goods such as toothpaste, toothbrushes and toilet paper, are relatively expensive.

Thus, these business experts pointed out that Korean companies’ opportunities lies in this direction.

The participants of the Peace Odyssey have named Russia’s Maritime Province as a possible “2nd Kaesong Industrial Complex.” It is in an ideal location, bordering the Korean Peninsula and China, with ready access to a diverse labor force. They have even speculated it can grow into an industrial complex with even more potential than Kaesong, initially a symbol of inter-Korean economic cooperation that has been shut down since February, following Pyongyang’s fourth nuclear test and long-range missile launch.

Should Korean manufacturers enter this region, it could help alleviate the shortage of industrial goods in Russia’ Far East and also encourage Seoul’s speedy participation in Moscow’s ongoing new Far East policy to spur development and modernization of this region.

“In order to succeed in a business, there has to be a strategy for manpower, technology and capital,” said Kim Seok-dang, a former chairman of the Financial Services, “and you can add to this the DNA of our people… to aim for a global mindset through their disposition as tenacious adventurers with a strong collective will.”

Russia has pushed for its policy to develop its Far East, but currently, economic cooperation between Seoul and Moscow has not been able to progress because of issues such as the North Korean nuclear and missile program and the Ukrainian situation.

The Peace Odyssey 2016 group on Aug. 10 headed to the Far Eastern Federal University on Russky Island, off the coast of Vladivostok, the location of the 2012 Asia-Pacific Economic Cooperation (APEC) leaders’ summit, to hold its first seminar. Experts engaged in a heated discussion over how Korea can become a strong partner for Russia but why there has not been progress.

Russia legal expert, Lee Tae-rim, a senior foreign attorney with Shin & Kim, pointed out, “Korea has to come out to the Russian Far East right now, but it has an image of being all talk and little action.” She voiced the view of many who have held close relations with Moscow, who unanimously emphasized the need for Korea-Russia economic relations and action on the part of Seoul.

“Russia’s Far East is a contact point with the Korean Peninsula, but currently, actual cooperation is happening with China rather than South Korea,” said Sung Weon-yong, a Northeast Asian economics professor at Incheon National University.

As cooperation between Seoul and Moscow has not been able to gain momentum, in the meantime, China has also been eying the Maritime Province.

Macao-based Chinese investors are constructing a large-scale luxury casino near Vladivostok International Airport to become Russia’s Las Vegas. Likewise, the Chinese are pushing for a joint construction project to build a high-speed railroad between Russia’s Zarubino port and its northeastern city of Hunchun in Jilin Province.

However, Moscow tends to feel burdened by China’s overt advances.

Lim Soo-suk, a deputy director general for Eurasian affairs with the Korean Ministry of Foreign Affairs, said, “Amid the cooperation agreed upon in the 2013 leaders’ summit between Korea and Russia, there are things that are being carried out and things that are not. As North Korea and Russia are under sanctions, there is a standstill.”

While Seoul has the will to take part in the Rajin-Khasan logistics project, North Korea continues with its nuclear tests and the United States and the European Union have imposed sanctions on Russia after it annexed Crimea in 2014 amid escalated tensions with Ukraine.

Such a situation has put a break on investments in the region.

When asked if Korean companies would be willing to invest in Russia upon governmental request even if it should yield no profit, SK Group Chairman Chey Tae-won pointed out, “There is no company that would invest just because the government asks it to.”

Investment in the Russian Maritime Province is seen not only to enable expansion of the region but also to provide an opportunity to connect to North Korea.

But conditions for small- and medium-sized companies to invest are even more limited because of a lack of information and funds. Thus, even if an opportunity in Russia’s Maritime Province arose, it would be difficult for them to take it without some form of exclusive complex or governmental support.

From Sept. 2 to 3, the Eastern Economic Forum, under the theme “Opening up the Russian Far East,” will take place in Vladivostok, which is being seen by observers as a chance to reach a breakthrough in the difficulties between the two countries’ cooperation.

President Park Geun-hye will attend the forum upon the invitation of Russian President Vladimir Putin as a guest of honor, where she will deliver a keynote speech, and the two leaders will also hold a summit.

A Korea-Russia Economic Science Technology Committee Meeting was held in Seoul on Thursday to discuss the details necessary to prepare for the upcoming bilateral summit.

The annual committee meeting first kicked off in 1997 in Seoul. It was held in Moscow five times and once in St. Petersburg. But last year, for the first time, Russia invited the Korean delegation to Vladivostok, considered an action symbolic of Putin’s vision to make Russia’s Far East into its economic capital. Likewise, the committee’s focus has, from the get-go, been focused on developing the Far East region.

“If the two countries have been testing each other,” said Lee Chang-woon, president of the Korea Transport Institute, “now the time has ripened.”

The popularity of Hallyu, or the Korean Wave, has swept Russia’s Far East, as it has with the rest of the world.

There are many similarities between Park’s Eurasia Initiative for economic cooperation between Europe and Asia and Putin’s Far East realignment policy. Likewise, development of infrastructure in Russia’s Maritime region and a network for energy exchange is beneficial for both countries.

Chung Duck-koo, a former commerce minister, pointed out, “Substantive reciprocal cooperation between the two countries can provide another route for Korea, which is largely dependent on the United States and China.”