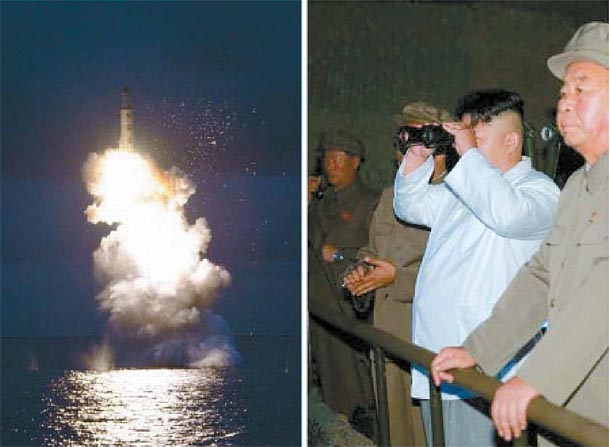 Left: a ballistic missile takes off from a submarine in waters off the eastern port city of Sinpo on Wednesday morning. Right: North Korean leader Kim Jong-un watches the launch through binoculars, accompanied by officials near the launch site. North Korean media on Thursday published wide coverage of the test of the submarine launched ballistic missile (SLBM), which flew 500 kilometers (310.6 miles) before falling into waters controlled by Japan, praising Kim for his guidance and boasting that the country was fully equipped with nuclear attack capability. [RODONG SINMUN]

North Korea’s state-run media Thursday boasted of the success of a submarine launched ballistic missile (SLBM) test from waters off the eastern city of Sinpo a day before, saying the launch demonstrated the “tremendous power” of a nation now “fully equipped with nuclear attack capability.”

“The test-fire of the SLBM today is the success of all successes and the victory of all victories,” Kim was quoted as saying.

“He noted with pride that the results of the test-fire proved in actuality that the DPRK joined the front rank of the military powers fully equipped with nuclear attack capability,” the KCNA reported. DPRK is an acronym of the Democratic People’s Republic of Korea, North Korea’s official name.

The North named the SLBM “Pukguksong,” which means polestar in Korean.

In a direct jab at Seoul and Washington, which are holding a 12-day joint military exercise, Kim warned them to refrain “from hurting the dignity and security of the DPRK with prudence and self-control,” and warned that “rash acts will only precipitate their self-destruction.”

The sense of confidence exhibited by the North was palpable in the report. It said the North had mastered SLBM technology “in a short span of time,” and through the successful launch the country demonstrated “inexhaustible muscle.”

The state-run daily Rodong Sinmun carried a front page photo in which Kim celebrated the success with military and party officials. Another six photos on the page showed Kim directing operations near the launch site. One of the seven photos shows Kim using binoculars to view the missile taking-off.

North Korea’s exuberant reports came a day after a successful launch of an SLBM at around 5:30 a.m. in waters off Sinpo, in which a missile reached 500 kilometers (310.6 miles) before falling into waters controlled by Japan.

Considering that the North only publicizes missile launches that have succeeded, the North’s wide coverage of Wednesday launch shows Pyongyang’s satisfaction with the test, an assessment shared by military experts. In order for an SLBM to succeed, a missile is required to have a range of 300 kilometers, a requirement the North surpassed by 200 kilometers Wednesday.

Pyongyang acknowledged Thursday that the missile was launched at a higher angle. The KCNA reported that the test was conducted “under a high-angle fire system in the maximum launching depth,” which it said “reconfirmed the stability of the underwater ballistic launching system.”

It was speculated that the North used a higher angle to shorten the missile’s range and not provoke Japan. But Japan was infuriated over the launch, with Prime Minister Shinzo Abe calling it an “unforgivable act.”

KCNA said the test was carried out “without any adverse impact on neighboring countries.” KCNA also boasted that the country had acquired technology for a SLBM warhead to re-enter the atmosphere, reporting the “working accuracy of the warhead in the re-entry section” had been achieved.

If true, that indicates that the latest SLBM overcame temperatures of over 7,000 degrees Celsius (12,630 degrees Fahrenheit) caused when an object enters the atmosphere.

It would mean the North has mastered technology enabling it to produce a ballistic missile capable of flying across the Pacific to strike the U.S. mainland. Such missiles have to leave the earth’s atmosphere and re-enter it.

The UN Security Council agreed to consider adopting a statement condemning the Wednesday launch following a closed-door emergency meeting later in the day.

According to the AP, Ramlan Bin Ibrahim, the current council president as well as Malaysia’s UN Ambassador, told reporters after the emergency meeting that most members of the council agreed on “a general sense of condemnation” over the missile launch. He said the U.S. was drafting the text of a statement and council members would “have a look at it.”

While movement is underway at the multinational body to produce a statement that will unequivocally condemn Pyongyang, it is unclear whether the council will adopt it, considering China’s recent attitude.

Earlier this month, China scuttled efforts to produce a statement condemning North Korea for a mid-range missile launch in July by insisting it include a denunciation of a U.S.-operated missile defense system scheduled to be deployed in South Korea by the end of next year.