As malls become more tailored, shopping is getting a lot more fun

As malls become more tailored, shopping is getting a lot more fun

Domestic malls were once places that targeted the general public, but they are now providing increasingly tailored experiences.


At E-mart Town Kintex in Goyang, Gyeonggi, there is an electronic appliances store known as “the men’s playground.” Electro Mart displays a wide array of products from basic home devices such as televisions, audio equipment, drones and plastic figures, attracting “kidult” consumers.

The launch of E-mart Town Kintex was led by Chung Yong-jin, the vice chairman and CEO of Shinsegae group, who is also known to be a kidult himself. In the first 10 months since its opening, E-mart Town Kintex was visited by 180,000 people, accomplishing its annual revenue goal of 30 billion won ($26.9 million) earlier than expected.

The store has nine branches nationwide. Unlike other shopping malls, where middle-aged women account for most of the shoppers, here, over 70 percent of the visitors are in their 30s and 40s, of which 30 to 40 percent are men. 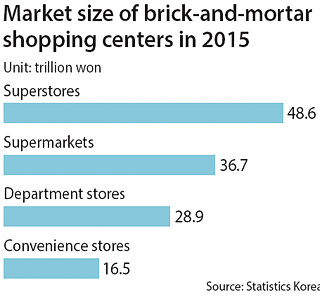 As such, malls are evolving in a way to emphasize “fun” shopping. Whereas in the past, shopping centers targeted the largest possible swath of the public and focused on high-rise buildings, shopping malls today have much narrow aims and search for special new themes to cater to consumers of particular taste such as kidults, gourmets and sports enthusiasts.

Department stores and superstores, otherwise known as discount chains, are also borrowing the “shopping arcade” concept of malls to create a synergy effect. Hyundai Department Store in Pangyo, Gyeonggi, is widely known as a go-to department store for dining. Its food court, located on the first basement floor, is the size of two soccer fields and attracts gourmets from all over the country.

The department store also recently held an event in which workers dressed up as the character Waldo from the popular children’s book “Where’s Waldo?” and it also regularly runs a merry-go-around on the rooftop. As a result of such efforts, Hyundai Department Store in Pangyo made 750 billion won during its first year, setting a record as the department store to have made the most revenue in its first year of opening.

Sports enthusiasts are another new target. In May, Home Plus West Suwon branch became the first superstore in Korea to install a futsal ground on its rooftop. Its HM Futsal Park has a full list of citizens wanting to hold games at the venue, with the reservation rate reaching 90 percent for weekday nights and almost 100 percent on the weekends. The number of visitors rose approximately 15 percent after its opening, according to a Home Plus spokesperson. The store expects an annual rise of an additional 50,000 customers.

Starfield Hanam, scheduled to open next month in Gyeonggi province, also plans to differentiate itself by catering to sports enthusiasts. Its “Aquafield” will take up three floors and consist of a waterpark and sauna, while the “Sports Monster” is to be equipped with facilities for extreme sports such as rock-climbing and free-falling. These recent moves have been prompted by the popularity of online shopping malls. As shopping becomes easier and more accessible via the internet, shoppers today expect a fresh experience-something more than simply buying products, which is done online easily enough.

“The key is to find a new concept,” said Yoon Sung-eun, professor at Chungkang College of Cultural Industries. “As the most populated grounds are saturated and the price of land is hitting the roof, the most effective method would be developing a differentiation strategy through storytelling.”