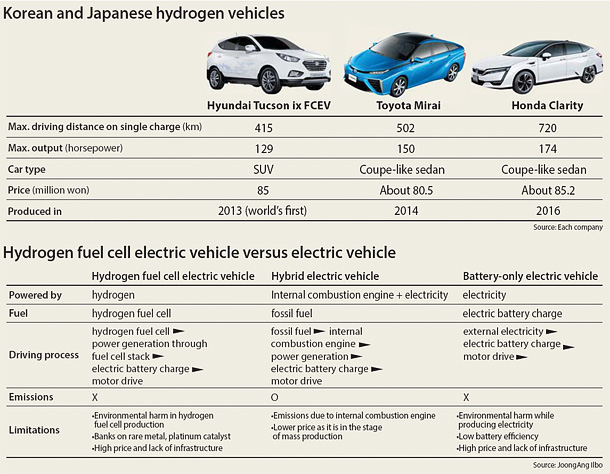 In 2013, the nation’s largest automaker, Hyundai Motor, launched the world’s first hydrogen fuel cell electric vehicle (FCEV) for mass production, the Tucson ix FCEV. The car can travel a maximum of 400 kilometers (249 miles) per charge and boasts a more stable storage tank, as well. It is the first publicly available FCEV.

At the same time, Japanese automakers are rapidly catching up in terms of the technology and infrastructure development needed for hydrogen-powered cars. Japan established The Research Association of Hydrogen Supply/Utilization Technology (HySUT), a private and public joint committee, in 2009 to focus on developing hydrogen charging stations and related infrastructure. Also, the Japanese carmaker Toyota introduced the Mirai in 2014, while Honda began mass production of the Clarity this year.

While 400 Mirais were sold in Japan last year, over 1,900 pre-orders were made in the United States this year. Following demand, Toyota has set itself a goal to expand production volume to 3,000 units per year by next year. One day, fuel cells may be more common than gas tanks.

A fuel cell converts chemical energy from a fuel into electricity through the chemical reaction of hydrogen or ethanol ions with oxygen. Vehicles running on electricity produced by such a system are called FCEVs. These vehicles have no emissions other than water vapor, which is why FCEVs are considered to be the most eco-friendly cars currently available.

Such vehicles are the same as battery-only electric vehicles (BEV) in that they turn their motors using electricity. However, unlike BEVs, which have to charge their batteries with external electricity, FCEVs just need hydrogen fuel input from charge stations as each one has an internal power generator called a fuel cell stack. This difference enables FCEV users to have a cheaper ride, or to travel farther for the same price.

Japan’s quick moves in FCEV development were due to both the private and public sectors’ efforts in building infrastructure that catered to hydrogen-powered cars including HySUT. The country already has 78 commercial hydrogen fuel charge stations. As of now, 35 of them are located near Tokyo, and Japan further plans to increase the number of stations to 160 by 2020 and 320 by 2025.

But in Korea, there are no charge stations available for public use. Indeed, there only about 10 charge stations, and these are all set up for research purposes. The Hydrogen Fusion Alliance, set up by the government on Wednesday, was established in order to meet the demand that would be created by the release of the first mass production of FCEVs in the world.

The Ministry of Trade, Industry and Energy will be taking charge of the alliance to provide 10,000 hydrogen-powered cars each to domestic and overseas markets, while setting up 100 charge stations nationwide. Domestic automakers are welcoming the government’s moves, though they are a bit late.

“We have confidence that we have leading technologies for hydrogen cars as our developments began in the late 1990s,” a spokesperson from Hyundai Motor said. “If the appropriate infrastructure is established, we can top the hydrogen car markets.”

Hyundai Motor is planning to introduce its hydrogen-powered bus by the end of this year and showcase a second-generation hydrogen car, which could drive a maximum 600 kilometers per charge, in time for the 2018 Winter Olympics in Pyeongchang, Korea.

And although the car is expected to cost around 60 million won ($53,838) - up to 25 million won cheaper than the first-generation - if a customer receives subsidies from the government then the price could be lowered by as much as 50 percent.

While the Korean government has taken steps towards infrastructure development for hydrogen vehicles, there remain many more tasks to overcome. Most needed is the financial backup to establish more hydrogen fuel charging stations, which cost over 3 billion won each. Also, safe production and transportation measures need to be developed, as hydrogen can be dangerously volatile in certain situations.

“As the government has released a roadmap for hydrogen-car development,” said Kwon Moon-sik, Hyundai Motor Group vice chairman, “I think we can soon introduce hydrogen cars that are competitive in both price and performance.”