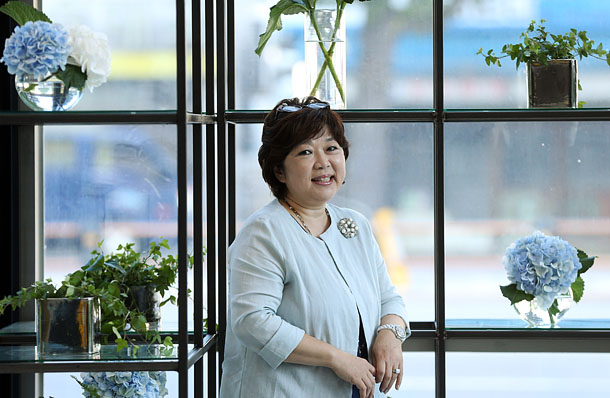 Lee Hye-gyung, CEO of Soho & Noho, poses at the lobby of Incheon Culture & Art College of Design, which she decorated with flowers. [KIM SEONG-RYONG]

The lobby of a building is its calling card. It makes a first impression, and if it’s good, leaves a lasting trace. It’s quite fitting then that Incheon Culture & Art College of Design in Bupyeong has such a charmingly artistic way of saying hello. Walking into its main lobby, one is greeted by a lovely floral display of hydrangeas, roses and other flowers.

Lee Hye-gyung, the woman who changed the lobby of the school into a plush flower garden, is the CEO of Soho & Noho, a boutique flower shop here in Korea. The 56-year-old will start giving lectures on floral and space design at Ewha Womans University and Incheon Culture & Art College of Design starting next semester.

“This is the first type of lecture offered in Korea that teaches floral design and space design at the same time,” said Lee during her interview with the JoongAng Ilbo earlier this month. “I designed the flower garden in the lobby of the school since I wanted students to feel what flowers can do to change the atmosphere of the space in general.”

Soho & Noho is one of the largest flower shops here in Korea, and it now has three official stores managed directly from the top as well as 25 franchise stores.

Lee opened a 198 square-meter (650 square-foot) flower cafe in Cheongdam-dong, southern Seoul, in 1998. Many celebrities, such as Lee Jung-jae and Yoon Suk-hwa, became frequent customers there and the cafe even provided flowers for an event at the Blue House.

Lee found her interests in floral design when she lived in New Zealand for five years, while her husband worked in advertising.

She said she was shocked by the popularity of florists such as Jane Packer, who gave free lectures at the local city hall. But now Lee finds herself in a similar position, and she said she plans to give lectures on how to design various places such as offices and wedding halls with different themes.

“Flowers can create a romantic atmosphere naturally,” Lee said. “You don’t need a whole bunch of flowers to do so. You can easily see the difference between having a flower on a desk and having a desk with none.”

Lee added that flowers have become a very important factor in people’s lifestyles. “In the past, flowers were used mainly as presents, but I think the culture has changed to where people enjoy flowers in their ordinary lives now.”

Lee isn’t the only one spreading an appreciation for flowers. The Ministry of Agriculture, Food and Rural Affairs has launched a campaign to encourage people to place a different flower on their desk every Friday of the year.

“I would like to do an online lecture on how to design one’s home with flowers during various seasons,” Lee said, and then gave an example, saying, “A cactus is good for the summer, when many people go on vacations, since they only need to water them once in two weeks.”