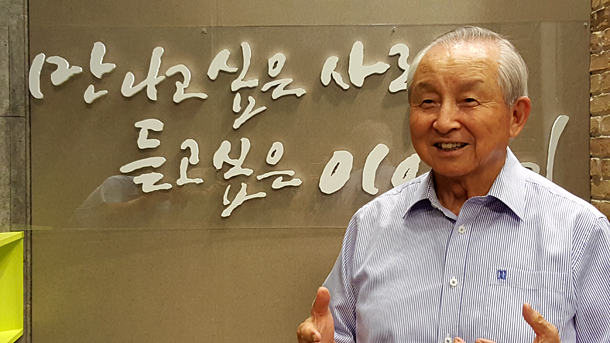 For the 11 years that he has been its host, Pastor Kim Jeang-hwan has not missed a single episode of his radio show, which is the Far East Broadcasting Company’s longest-running radio program. [BAIK SUNG-HO]

On a sunny Monday in Mapo District, western Seoul, the JoongAng Ilbo met with Kim Jeang-hwan, one of Korea’s most enduring talk show hosts. “I had an opportunity to meet Billy Graham last year when I visited America,” said Kim. “He’s 97 years old this year and he looked very healthy. He said he wishes to do some evangelical work in Korea before he gets the calling from God.”

The longest running show on the Far East Broadcasting Company (FEBC), which is celebrating its 65th anniversary this year, is Kim’s radio show. Kim interviews guests with life stories that are moving or interesting. Kim hosted the 600th episode of his radio show on Friday.

He’s like the Larry King of Korea - if King was also an ordained pastor. About 800 guests have appeared on the show, including Kim Young-sam, the 14th president of Korea, other politicians, celebrities and even street cleaners. Kim hasn’t missed a single episode since the show started on Jan. 28, 2005.

The 600th special episode was held live in FEBC’s art hall with about 500 people in the audience. Special guests appeared, as well - including some people from a very special moment in Kim’s past: a Christian rally held by Billy Graham in 1973 in Seoul’s Yeouido Plaza.

“People who were at Yeouido Plaza attended,” said Kim. “And among the participants, one of them became a pastor.” Some of the other special guests were actress Ko Eun-ha, the senior pastor of the Heaven Gate church Lee Gi-bok and singer Jeong Ho-yoon.

“When Billy Graham held the rally in Yeouido Plaza, about 1.1 million people participated,” Kim recalled. “On that day, there were about 40,000 people who became firm believers in Jesus. After this rally in 1973, large churches started to appear, so it can be said that the rally had a big influence.”

Kim, who was 39 at the time, was Graham’s interpreter at the rally. Many credited Kim for raising the emotional tone of the rally by interpreting Graham’s preaching with passion.

“It’s a bit difficult for a person at the age of 62 to host a radio show,” Kim said. “But I can’t stop, knowing that there are Chinese and North Korean listeners who can recognize my voice in an instant.” Kim is a determined dynamo. His office is on the fourth floor of a building and he refuses to take the elevator, insisting on using the stairs.

Kim is expected to give a prayer in New York before the UN General Assembly in mid-September.