DSME may have bribed writer

DSME may have bribed writer 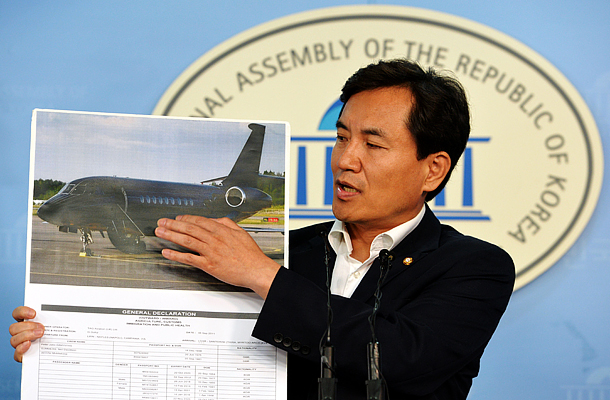 Saenuri Rep. Kim Jin-tae holds a press conference Friday at the National Assembly, discussing how the chief editorial writer of a media outlet traveled across Europe on a luxury jet chartered by the controversy-ridden DSME. [NEWSIS]

A ruling party lawmaker said Friday that a chief editorial writer of a prominent media outlet traveled across Europe on a luxury jet chartered by the controversy-ridden Daewoo Shipbuilding and Marine Engineering (DSME), accompanied by the chief of a PR agency who faces accusations of collusion and illegal lobbying.

Saenuri Party Rep. Kim Jin-tae held a press conference at the National Assembly and revealed that records from Korea Development Bank, the largest stakeholder in DSME, showed that two civilians flew on a British chartered plane, along with the company’s then CEO and employees, on Sept. 6, 2011, from Naples, Italy, to Santorini in Greece.

They were the unnamed chief editorial writer and Park Soo-hwan, the president of News Communications, a PR agency that promoted the company between 2009 and 2011 that is accused of being involved in the DSME’s corruption and book-cooking scandal. The prosecution requested an arrest warrant for Park on Wednesday.

“Recently, various rumors have been raised on the possible collusion of Park Soo-hwan with the prominent journalist, and there is significance that one of them has been confirmed as truth,” said Kim, a two-term assemblyman of the pro-President Park Geun-hye faction. “After researching the said chartered jet, [we found that] it is a 10-passenger plane that Hollywood stars usually use, one that regular people would never dream of seeing in a lifetime.”

The business trip was led by then DSME CEO Nam Sang-tae, who is under arrest for his alleged involvement in the company’s accounting fraud.

“At that time,” Kim said, “DSME was undergoing a debt workout program and was on the verge of bankruptcy, but the company’s CEO took civilians on a fancy jet, traveling across Europe.”

The lawmaker called spending that much money on a brief trip to Europe a case of “extreme moral hazard,” adding, “I am curious as to who shouldered the expenses and why Naples and Santorini, which were not part of the business trip, were included.”

He added that after the trip this unnamed prominent media outlet published a “flattering editorial” that overlooked various issues and said that DSME, as it develops into a global company, will contribute to economic development.

The said chief editorial writer released a statement claiming that he received an official invitation by the DSME and was on a business trip to cover Greece’s sovereign default at that time.

“While CEO Nam went to European countries including Cyprus,” the statement read, “I only flew together when visiting the related locations [Naples and Santorini].”

Park’s PR agency is said to have received at least 2 billion won from 2009 to 2011, a period when DSME was helmed by Nam. The paycheck, authorities said, was far more than what the agency had given back in services.

As part of the ongoing probe surrounding DSME into corporate malpractice and accounting fraud charges, News Communications was raided earlier this month because of suspicions it received kickbacks.

Park is suspected of illegally lobbying for Nam to pursue a second term as the CEO of DSME, using her strong corporate and government connections. She is said to have very close connections with former President Lee Myung-bak’s political aides and Min Yoo-sung, former president of the Korea Development Bank.

On Friday morning, Park was summoned to the Seoul Central District Prosecutors’ Office for questioning. Park denied accusations of lobbying and was said to have described the amount she received from DSME as “payment for earnest work.”