After game-fixing verdict, ball is in KBO’s court

After game-fixing verdict, ball is in KBO’s court 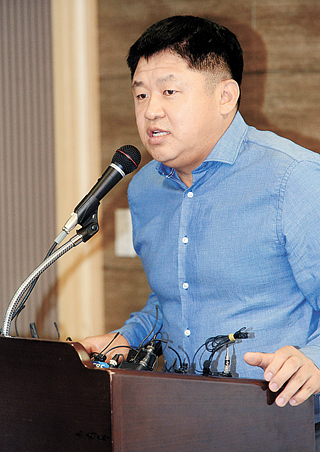 Disgraced basketball coach Kang Dong-hee speaks to baseball players from KT Wiz on Sunday. Kang, who was banned for life from professional basketball for match-fixing, said he hopes fellow athletes do not walk down the same path as he did. [NEWSIS]

After pitcher Lee Tae-yang of the NC Dinos was convicted of match-fixing on Friday by the Changwon District Court in South Gyeongsang, attention now turns to how the Korea Baseball Organization (KBO) will reprimand the pitcher and address the match-fixing scandals that have plagued the country’s professional sports leagues in recent years.

Lee was given a suspended two-year prison term for intentionally walking or trying to walk a batter in four games last season. He was indicted without physical detention in late July for rigging games and receiving as much as 20 million won ($17,579) as compensation.

“We need to know whether the Dinos and Lee himself will agree to the ruling,” said a KBO staffer who requested anonymity because of the case’s sensitivity. “They could still lodge an appeal, but eventually, we will discuss with the Dinos and hold a meeting to review how Lee will be punished.”

If Lee does not lodge an appeal within a week, his court sentence will be finalized. After the trial on Friday, in response to a question on whether he would appeal, Lee said, “No, and I am sorry.”

Korea’s top baseball league suspended Lee after the case went public in July and has been waiting for the court ruling to decide on its next move. With the decision now out, the KBO is likely to proceed with a meeting to decide on punishment for the pitcher.

In the past, the governing body of Korean baseball has deemed match-fixing an intolerable offense and meted out serious punishment alongside court sentences. In 2012, the KBO banned LG Twins pitchers Park Hyun-joon and Kim Sung-hyun for life when they were convicted for rigging games. The court had slapped them with suspended jail terms and fines.

Lee faces the similar likelihood of being banned from the league for life.

The KBO’s meeting will likely come before the trial outcome of another player accused of match-fixing, outfielder Moon Woo-ram of Sangmu, the Korea Armed Forces Athletic Corps’ baseball team. Moon faces similar charges to Lee, though his case is being handled by military prosecutors since he is playing on the military team as an active serviceman.

Moon is denying the allegations.

Korean baseball has lately been embroiled in match-fixing scandals, with Lee Jae-hak of the NC Dinos and Yoo Chang-sik of the Kia Tigers also under investigation.

To combat the scandals, the latest initiative from the KBO came Sunday, when the KT Wiz baseball team invited disgraced basketball coach Kang Dong-hee to speak.

Kang was suspended for life from the Korean Basketball League in 2012 after he was found guilty of fixing matches while coaching for the Wonju Dongbu Promy.

“I hope my fellow athletes do not walk down the same path as I did,” Kang said, adding that athletes in Korea often spend the majority of their lives doing nothing but sports and thus often lack the basic intuition of right and wrong that can come easy for others.

The former basketball star added that athletes who consider agreeing to such requests from acquaintances to fix games do so as an act of fidelity and thus have a hard time saying no. “But they should not think of such acts [fixing matches] as being loyal,” he said.