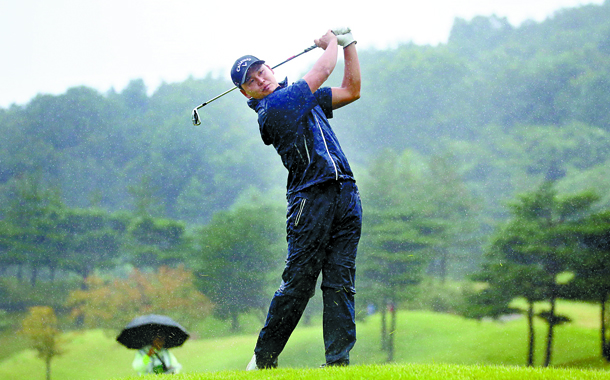 Kim Jun-sung, a fifth-year pro in the Korea Professional Golfers’ Association (KPGA), claimed his maiden win on the Korea-based tour Sunday after taking the title at the 59th KPGA Championship at the A-ONE Country Club in Yangsan, South Gyeongsang.

In the middle of pouring rain and wind gusts of 15 miles per hour, Kim shot an impressive 7-under 65 during the final round of the KPGA major championship to conclude the entire tournament with 18-under 270 (67-70-68-65).

Kim had finished the previous day at fourth, but he went on a birdie spree on the fourth day on Sunday, raking in eight birdies total, and climbed up the leaderboard to finish as the winner.

After taking a birdie at the par-4 first hole, Kim reeled in birdies from the fifth to 10th holes straight, an impressive feat considering how wet the grass was from the weather, not to mention the wind that made it difficult for golfers to measure their shots.

The last of the birdie spree at the 10th hole was the play of the day for the final day of the championship, during which Kim grabbed a birdie with the putt from the top of the green about 3 to 4 meters (10 to 13 feet) away from the pin. His putter seemed to have been sharpened by a whetstone this day, as he continued to nail down long-distance putts throughout the round.

However, winning a major event as prestigious as the KPGA Championship does not happen with just remarkable putting but also with every aspect of the play clicking together like cogwheels. This was precisely the case for Kim on Sunday, as best demonstrated by his performance at the ninth hole, a par-5 hole. Kim’s third approach shot from the fairway landed perfectly on the green, just a few inches off the pin to create a perfect “tip-in” birdie chance.

After the birdie run from the fifth to 10th holes, Kim collected the last birdie of the day at the 13th hole. Rain and wind seemed to have forced his tee shot to skid. Against the odds, with sheer determination to win the tournament, Kim managed to birdie the hole.

He saw his chance for a win almost slip out of his hands at the 15th hole when he took the first and only bogey of the day. He had what seemed to be an easy par-saving opportunity, but the ball hit the edge of the hole and bounced right out, giving Kim an unexpected bogey.

But Kim remained composed and parred the remaining three holes from the 16th to 18th, the most difficult in the course.

Meanwhile, Park Jun-sub, then co-leader, bogeyed the final hole to lose a stroke and step down in the leaderboard to allow the tournament to end without a two-way playoff between him and Kim.

Park, who finished the day 2-under, grabbed six birdies, but his efforts were for naught due to his four bogeys.

With the win at the KPGA Championship this year, not only did Kim take home the first trophy of his professional career but also 200 million won ($178,000) out of the match purse, which had a total value of 1 billion won. Runner-up Park brought home 100 million won.

“I feel good, but I think I was way too focused all day that I am still rather calm,” Kim said after his win. “I am just glad that the game has ended.

“The first three rounds helped me play well today,” Kim added. “My shots felt solid. But I did feel something was missing during the plays, so I thought to myself that I should stay in the rhythm. I think that’s why I had such success with putting today.”