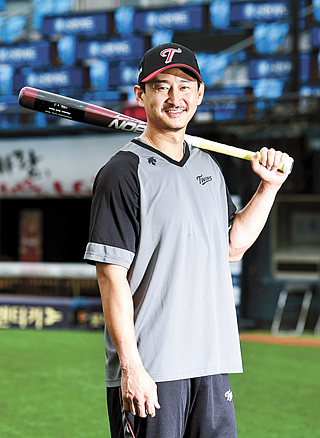 Some say age is just a number, and for the LG Twins’ 37-year-old outfielder Park Yong-taik, it’s never too late to learn something new to improve his game on the plate.

Park’s heyday in baseball came when he was 30. In 2009, he received the season batting title after hitting .372. Since then, he has batted over .300 every season that he has played in the Korea Baseball Organization (KBO).

This year, the Twins outfielder has so far ranked sixth in batting, with .348. He added another achievement to his list of accolades on Aug. 11, when he made the 2,000th hit of his baseball career.

But even with his breadth of experience, Park is not reluctant to take lessons from junior players and make adjustments to improve his performance.

“Batting form is not something that changes year by year,” he said. “If necessary, I may bat with different forms every day depending on my conditions that day.”

One way Park learns is by watching baseball videos on the internet, even performance clips of players much younger than him.

“I like to watch highlights, ranging from little leagues to major leagues,” he said. “But I don’t really watch videos of myself in the past. Physically, I am different than before [when I was younger], and pitchers I go up against are not the same, either.”

While some may see it as a bizarre practice method, Park believes that this learning process is a major part of what helps keep him going, especially since he is well into his 30s.

Recently, he has started to let go of his left hand the moment the bat makes contact with the ball, a form favored by the legendary and now retired Samsung Lions outfielder Yang Joon-hyuk. The move might come with less power, but Park says he bats more accurately now that he’s got the new form going.

“Of course, I got the form from Yang,” Park said, smiling. “I made changes to fit my taste when I first adopted it.”

But still, between the youngsters of the Little League and senior players like Yang, his best teachers remain his coaches.

Throughout his career ups and downs, Park has confided in Kim Kwang-lim, the NC Dinos’ current hitting coach; Kim Sung-keun, now the manager of the Hanwha Eagles; and Kim Yong-dal, a former Twins coach.

“When I was in my third year in college, they changed from aluminum bats to wooden ones,” Park recalls. “I trained hard with Coach Kim Kwang-lim. That’s when I learned how a lefty could hit a split ball toward the left side of the field.

“When I went on to join the Twins in 2002, it was manager Kim Sung-keun [who supervised the Twins then] that made me go at it hard,” Park said. “I remember swinging my bat well after midnight and just passing out in bed.”

With Kim Yong-dal, Park recalls arguing with him frequently about his form. “My records did take a hit briefly, but eventually, I came out a better hitter,” Park said.

“Spending my 20s with them, that’s how I am where I am today. Of course, I won’t be able to train as brutally. I am a little old for that.”

Humble as he may be about his age, there are only a handful of players in the KBO today that can manage as many different positions as Park in the batting lineup.

He has gone from first in the order to sixth throughout his career, a testament to the different talents he brings to the table, including his high on-base percentage, slugging ability and quick feet. In fact, Park won the season title for number of stolen bases in 2005.

“It was essentially a battle against Jamsil Stadium,” Park said. “I wanted to be a competent batter in such a huge stadium.”

As of Saturday, he has had 2,018 career hits, and all of them came while wearing the Twins uniform. This means he could comfortably top the record for most hits with a single franchise, a record currently held by his old Twins colleague Lee Byung-kyu, a retired outfielder that hit 2,042 with the team.

“I am always trying to stay on my feet so I can play this game longer and better,” Park said. “I have cut short on a few things compared to while I was young, so I am confident I can go for at least five to six more years.”

The veteran player then hinted at bigger ambitions.