Korea and Japan to resume talks on currency swap

Korea and Japan to resume talks on currency swap 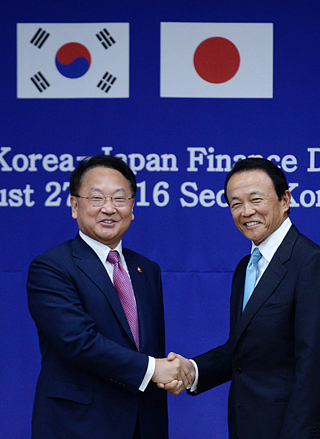 Korea and Japan agreed to launch talks to resume a currency swap between the two countries during a ministerial level meeting, reviving the possibility of the economic cooperation that ended in February.

The move, first suggested by Korea, is intended to hedge risks amid uncertain global economic landscapes.

“In the face of escalating global economic uncertainties, currency swaps with other countries can preemptively stabilize the economy,” said Finance Minister Yoo Il-ho after the talks with Japan’s finance chief Taro Aso on Saturday.

“The decision is in line with the government’s stance to extend the range and size of currency swap programs,” the minister said.

The Ministry of Strategy and Finance said that it will pursue “a new swap” aimed at exchanging equivalent amounts of notes. In previous arrangements, Korea swapped twice as much as Japan.

The specific size of the deal has yet to be announced.

“It would take several months to announce new details because we need to have working-level talks soon,” Yoo said, “And it usually takes three to four months for an agreement to be officially reached.”

The ministry said before the meeting that the won-yen currency swap was initially not included on the agenda. But the issue gained momentum after Yoo proposed to resume talks during the meeting.

The proposal comes as diplomatic tensions between the two countries have retreated following an agreement that aims to settle the row over “comfort women.”

A deterioration in diplomatic relations has often struck a blow to the won-yen currency arrangement.

After former President Lee Myung-bak visited Dokdo, a set of islets in dispute between the two countries, in 2012, the amount of currency swap shrank. The swap exchange hit a record low level in 2013 and the two countries let the program expire last year.

The won-yen swap deal was launched in 2001 with an aim of securing foreign currencies in times of financial stress. At its peak, the deal reached $70 billion in 2011 but was reduced to the $10 billion-level in 2012 and afterward.

Analysts said that the renewed currency swap with Japan will also act as a countermeasure to reduce economic dependence on China. China-Korea relations recently grew chilly after the United States and Korea decided to deploy the Terminal High Altitude Area Defense (Thaad) system.

China is currently Korea’s largest trading partner. The currency exchange deal between Korea and China is worth 64 trillion won ($56 billion).

The swap deal with China is set to expire in 2017.

In addition to the swap program, Korea and Japan also agreed to strengthen cooperation in policy to navigate global headwinds such as Britain’s decision to leave the European Union.

The two parties will also closely discuss the agenda at the G-20 meeting next month in China, the Finance Ministry said.