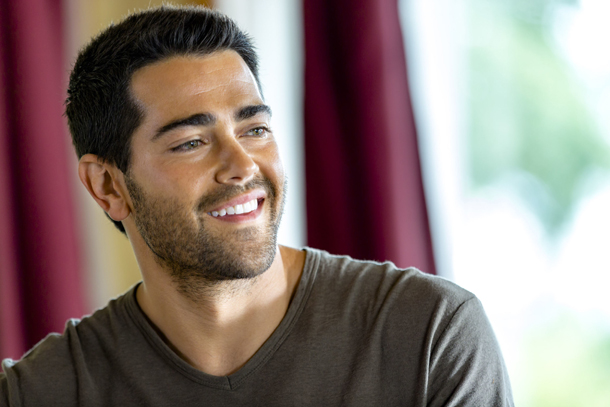 LOS ANGELES - Jesse Metcalfe is stretching himself artistically as a musician and, on the side, as a jewelry designer.

When he proposed to actress Cara Santana this month on a sailboat in New York’s Hudson River, the diamond ring he slipped on her finger was one he helped create. The couple have been together for a decade.

“Don’t they say it’s a carat for every year you’re together?” Metcalfe said. “I couldn’t quite afford that, but I think I did pretty well.”

Their engagement crowns a busy year for the “John Tucker Must Die’’ and “Dallas” actor. He plays opposite Meghan Ory in Hallmark Channel’s new television series “Chesapeake Shores” and stars in an upcoming big-screen movie “The Ninth Passenger” as a thief involved in corporate espionage.

“Chesapeake Shores,” based on Sherryl Woods’ novels, opened with driven working woman and divorced mom Abby O’Brien (Ory) pondering a move from New York City to her Maryland hometown to improve life for her daughters. Metcalfe brings the romance as Trace, Abby’s high school sweetheart. He’s a country singer who’s beaten his own path home to Chesapeake Shores after leaving his Nashville career under a mysterious - for now - cloud.

Metcalfe talked with the Associated Press about the drama, including the chance to work his musical muscles in it, and when he and Santana will tie the knot.

Q. Many actors yearn to front a band. Is playing a musician the next best thing?

A. Metcalfe: At the risk of sounding cliched, I have been playing and singing and writing music for a decade now. It was just something I always kept to myself. ... But this is a nice opportunity, and I wrote two original songs to the themes and the tone of the show. It’s not necessarily the style in which I normally write (indie singer-songwriter). ... But I get to live out my dream a bit and be a successful country music artist in the series.

How much does Trace’s Nashville past figure in his story?

I definitely wanted him to be layered and I wanted him to have a secret, a dark past, a reason he came back to Chesapeake Shores. In a lot of Hallmark shows and films, a major theme is coming back home, having the realization that success in the big city isn’t as satisfying as the comfort you feel back home (with family). That theme rings true in this series as well, but the characters are a lot more layered, a lot more complicated. ... Hallmark said they wanted to push the envelope a little, attract a younger audience and do something different, and I think we’ve done that.

How far can you stretch the boundaries on a family friendly channel?

I think it’s about keeping a little bit of edge in the show. If we’re going to write and play compelling characters, sometimes they have to make mistakes. Not small mistakes, but relatively big mistakes. And you have to trust that in their pursuit of redemption, the audience will also find them redeemable as well.

How did you go about designing the engagement ring?

I had a close friend, [jewelry maker] Adam Campbell, walk me through the process. We knew that Cara wanted an emerald shape. ... I wanted a really feminine, delicate low-profile setting and band with diamonds all the way around the band and the basket, and really small prongs holding the diamond. Cara deserved it.

Has the wedding date been set?

Still to be determined. We’re roughly talking about a two-year plan: a year to enjoy our engagement and a year to start planning.