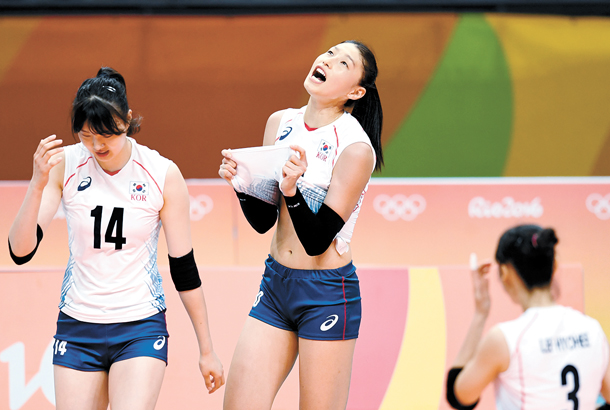 Kim Yeon-kyoung, 28, a member of the national women’s volleyball team who plays for Turkey’s Fenerbahce, had three roles for the Rio Olympics. On the volleyball court, she was in charge of attacks. As a captain of the team, she cared for other players. Because of her English proficiency, she also interpreted for the team. The Korea Volleyball Association did not send any staff to Brazil as the Olympic committee issued only three AD cards for the manager, coach and analyst for access to the venue.

Kim Hae-ran, a 32 year-old player for the KGC team, said, “It was frustrating to see Kim handle so many roles.” On Aug. 16, the volleyball team lost to the Netherlands, 3-1 in the quarterfinals. Kim said she wished she could focus on the game.

The volleyball association faced fierce criticism as Kim had to interpret when she was supposed to focus on the games. After the Olympic schedule, athletes returned home separately.

The volleyball association quickly clarified. “Without an AD card, no staff can enter the stadium or the Olympic village. Even if we sent staff to Rio, they cannot assist the team. Also, hiring an interpreter was not an option.”

But securing the necessary number of AD cards is an administrative responsibility. The Korea Handball Association was also issued three AD cards. But the handball association appealed to the Korean Olympic Committee and the International Handball Association and had the medical staff and mental trainers issued daily passes. An association official was also issued a daily pass to provide interpretation. The volleyball association gave up without making the minimum effort to provide assistance for the athletes.

The incompetency and indifference of the volleyball association originates from financial struggle. The former chairman purchased a building for the association in Dogok-dong, Seoul, and the purchase resulted in a tremendous financial loss. Naturally, the national team did not get sufficient support. Rivals participated in the Volleyball World Grand Prix to improve their plays.

But in Rio, the frustrating reality of the volleyball scene was revealed.

Two years ago, the women’s volleyball team was given a modest kimchi stew as a celebration dinner after winning a gold medal in the 2014 Incheon Asian Games. The players smiled over the modest celebration two years ago, but after Rio, the team disbanded without even getting that.


*The author is a sports news reporter of the JoongAng Ilbo.