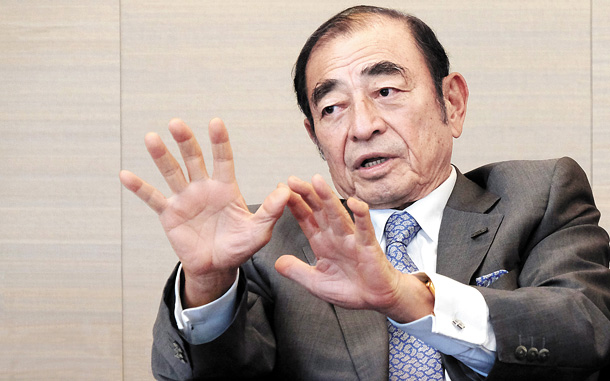 Fujifilm’s Shigetaka Komori, 77, joined the company in 1963 and was made CEO in 2003. The first thing he did as CEO was shift the company’s direction from defeating arch-rival Kodak to restructuring for the post-film era. He pushed through major changes. As a result, Fujifilm was able to overhaul its business portfolio from film to high-tech.

In Japan, Komori is considered a leading innovator in business. “Japanese companies are slow but steady in finding ways to innovate,” he said in an interview at his office in Tokyo, Japan. “Fujifilm is one example - it took over ten years to reform.”

Q. Is Fujifilm a film manufacturer?

A. It was in the past, but now Fujifilm is not a company that can be defined by one product. I would rather say it is a “multiple” company, because we engage not only in film, but also chemical materials, cosmetics and digital devices. It’s not just about Fujifilm; whether it’s a car company or steel manufacturer, we are living in a world where companies cannot survive on a single product.

How did you successfully reform the company?

First, I closed down businesses rather than reducing them in size. One example is our film business, which was seeing difficulties in the digital era. We went through endless questioning of what we should do next. Once we chose, we pushed it through right away. What we did best was film. The next question was what would we do if film can’t make it through the next generation? Our answer was to survive by using our film-making technology to the fullest. LCD materials, cosmetics and digital devices were new items we found along the way.

Do you agree that restructuring is necessary for innovation?

It is true that innovation may be followed by large expenses and a difficult time for employees. Fujifilm lost over 5,000 employees in the process. There was communication and persuasion all the way through. For laid off employees, we provided a generous amount of severance pay. We bought business rights from stores that couldn’t generate revenues. We saw expenditures for restructuring as a temporary price for survival. To every employee above middle-rank, we explained why we had to drop our film business and invest in a new business sector. Restructuring was not an option, but ours was definitely not an inhumane process.

How would you define your leadership?

My strength as a leader is the ability to predict based on a quick understanding of what is going on in our world. Without this kind of insight, you cannot lead a group of people even if you have the charisma of a leader.

It is every office worker’s dream to become a senior executive. How did you move up from staffer to CEO?

I was - and still am - a member of an organization. For every position I had, I did my very best to fulfill the tasks assigned to me. Rather than focusing on the big picture, I found solutions step-by-step as to how I could accomplish my job and how our company could surpass competitors. It’s the same thing for a CEO. Winning was never my only goal. Playing fair is a value I always keep in mind.