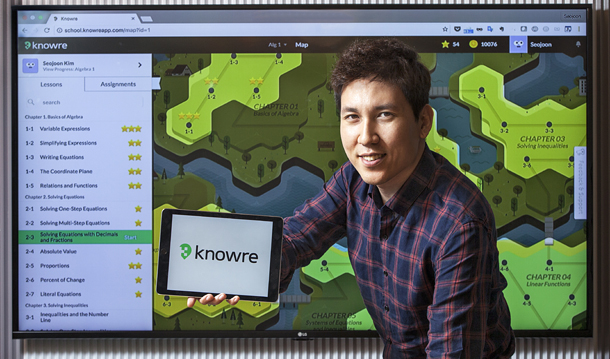 For those whom the word “math” conjures up dreadful images from their days in middle-school algebra and high-school calculus, there is Knowre, a Korean start-up founded in 2012 that hopes to save students from the nightmare of wrestling with complex equations and make solving math problems an enjoyable experience.

“Studying should be a fun activity, and that is core to gamification,” said the company’s chief product officer (CPO), Kim Seo-joon, who is also one of the five co-founders. Gamification refers to the process of applying elements of gameplay to other activities.

“We chose math because we wanted to go global and also because it was something all five founders were good at,” Kim said during an interview on Aug. 19 at the WeWork co-working office space in southern Seoul.

Unlike literature, history and other subjects where there might be a large difference in curricula globally, math is built on the universal language of numbers. 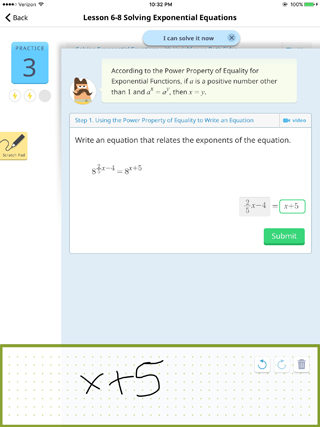 And since the subject has worldwide notoriety for being one of the most difficult, the founders chose to focus first on math and hope to gradually expand to science and language courses as well.

All five co-founders of the start-up including Kim were high-performing students in math. Kim himself graduated from Seoul Science High School and Pohang University of Science and Technology, an elite school in math and science.

“Our company actually started as a private academy in 2010, and in 2012, we spun off from the academy to found Knowre,” Kim said. “Through the experience of actually consulting with teenage students, we felt the need to apply digital technology to provide instant feedback and reward students to keep them engaged.”

When Knowre first started in 2012, it actually received attention in the United States rather than at home, after CEO Kim Yong-jae presented on the company at a regional conference of the National Council of Teachers of Mathematics in Philadelphia, where over 60,000 math teachers attended.

After a successful exhibition of their product, the start-up was awarded the top prize at the NYC Schools Gap App Challenge in 2013, an education technology competition hosted by the New York City Department of Education.

In 2014, the magazine company Fast Company selected Knowre as one of the top 10 most innovative companies in the world.

Over the course of earning recognition, the start-up was able to raise 400 million won ($359,000) in seed money from angel investors. It then earned another 1.5 billion won in series A funding mostly through the Korean operation of Japan-based SoftBank Ventures. In September 2014, the company earned series B funding worth 7.3 billion won.

As word spread, Knowre began selling its math gamification kit to public schools in the United States in 2014. Now, over 70 schools are using the company’s kit to complement their teaching.

“We were founded as an American company because the United States was the only market we knew of that had the infrastructure in schools to provide gamification content to students,” CPO Kim said.

“In Korea, we are still struggling to enter the public sector because government regulations and the education environment do not match with our products just yet.”

Public schools subscribe to Knowre’s kit on a yearly basis. The kit includes tablet PC apps and games that can be accessed through the company’s cloud system. The price a school pays for the kit is based on how many students access the system.

When a student logs in to Knowre’s app, several math levels are displayed. After a user selects a level, such as the first level of Algebra 1, a map containing islands labeled with names of “chapters” appear. Each chapter contains a set of math problems catered to the student’s learning progress. For each question, students can briefly learn about the necessary concepts through a short video.

“Unlike many other apps providing gamification on math, I think we have advanced technology to capture students’ strengths and weaknesses and provide the most necessary follow-up questions and lessons,” Kim said.

Aside from kits for public schools, the start-up also provides kits privately-run academies both in the United States and Korea. For Korea, the private-academy market is much bigger, as they have not yet succeeded in entering Korean public schools.

As the app must be used on a tablet PC, students subscribing to the private-academy Knowre kits have to visit designated centers in Korea to use the app. The fact that Knowre programs must be played on certain devices is among the reasons why it is hard for the company to break into Korean public schools. The infrastructure in Korean public education has not reached that point yet.

“Still, it’s better than when we just started business because back then, Korean people thought we were crazy to make students study math through tablet computers, instead of pencil and paper,” Kim said.

For Knowre, taking advantage of digital technology is very important in education because it fills a gap that human-to-human education sometimes cannot deliver. Digital education can greatly cut costs and provide on-demand tutoring if well adapted to students, according to Knowre.

Knowre makes heavy use of technology and tries to train all employees to be able to engage in coding to a certain level. Both students and educators say the app’s processes - the way it gives immediate feedback and breaks down questions - are effective.

“We now have about 50 employees, and while half are engineers and half are math content providers, all of them must learn coding for the first three months so that they can think about how the questions should be broken down from the problem-designing stage,” Kim said.

Many of the employees include foreigners to cater to the needs of overseas math curricula, including in the United States. Knowre is preparing a test version for China in partnership with several Chinese education companies. Testing is set to begin in September.

“For each country, it is like creating a whole set of new products because even though the fundamental concepts are the same, the curriculum differs and the way to approach each question differs greatly by country,” Kim said.

Knowre, which currently has its headquarters in New York and an office in Seoul, plans to enter other countries, but because it needs to come up with new curricula catered to each country, it might take some time, Kim said.