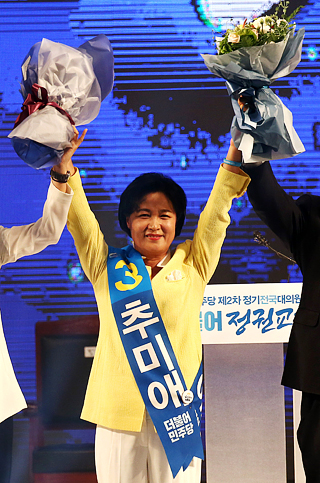 Five-term lawmaker Choo Mi-ae was officially named the new leader of the Minjoo Party of Korea at the party convention held in the Olympics Gymnastics Arena in southern Seoul on Saturday, becoming the first woman from the Gyeongsang region to take the helm of the main opposition party in its 60 years of history. [OH SANG-MIN]

Veteran lawmaker Choo Mi-ae was elected chairwoman of the Minjoo Party on Saturday, becoming the first woman from the Gyeongsang region to lead the party in its 60 years of history. With Choo’s election to lead the country’s largest opposition party with 121 lawmakers, the leadership landscape tilted considerably in favor of Moon Jae-in, the former presidential candidate for the opposition bloc in the 2012 race.

At the national convention on Saturday, Choo won 54.03 percent of the vote, defeating rivals Rep. Lee Jong-kul and former Gyeonggi education office chief Kim Sang-gon. Lee and Kim each won 23.89 and 22.08 percent of the vote, a distant second and third. Lee, Minjoo’s former floor leader, ran on a platform that he would keep the pro-Moon faction in check, claiming Moon’s nomination as a party candidate without challenge would guarantee his defeat again to the Saenuri runner next year.

“I will count every vote you have cast for me as your order to me that I must rid us of intraparty division in seeking unity, and that I must remake the Minjoo as a powerful opposition party through such unity,” Choo said in an acceptance speech before thousands of party delegates and members. “I will arrange a fair party nomination process to elect a candidate who will win the power on December 20, 2017,” said Choo, referring to the date of the upcoming presidential election.

Reflecting on long-running factional strife among lawmakers, Choo said accomplishing party unity would be the first thing she would tackle as the party leader. Regarding the all-important election next year, the five-term lawmaker said the party platform would be centered on improving people’s livelihoods.

Choo’s election on Saturday ended the interim leadership of Kim Chong-in, a former economist who worked for the Park Geun-hye campaign in 2012. Under Kim’s seven-month leadership, the Minjoo scored an upset in the April general election, winning 123 seats, one more than the ruling party won. Kim credited himself for his role in the Minjoo on Saturday, saying that under his watch, the approval rating for the party rose to 26 percent from 11 percent when he took control in January.

Along with Choo, eight members were elected to the party’s supreme council. The nine elected Saturday are all pro-Moon, who is certain to run again for the presidency. He was defeated by incumbent President Park Geun-hye in 2012 by a margin of 3.6 percent.

Choo is also considered a member of the pro-Moon group since she was named a party supreme council member by then-chairman Moon in February last year after Moon’s election at the party convention. Of the eight supreme council members elected Saturday is Yang Hyang-ja, a former Samsung Electronics executive who was handpicked by Moon to run in the general election in April for a Gwangju district. Rep. Kim Byoung-gwan, among the eight elected, was also handpicked by the former human rights lawyer.

Choo entered politics in 1995 when she was recruited by former president Kim Dae-jung and was elected a lawmaker the following year. Born in Daegu, Choo passed the bar exam in 1982 and worked as a judge prior to jumping into politics.

The 58-year-old Choo indicated that Minjoo under her leadership would take tougher ideological positions to keep the ruling Saenuri and the Park government in check. On the issue of deployment of the U.S-operated missile defense system in Seongju County, North Gyeongsang, Choo made clear the party would officially oppose it, a stance that comes in contrast to that of Minjoo’s former interim leader Kim Chong-in, who called for a so-called strategic ambivalence by neither supporting nor objecting it.

Choo said that, following her victory, she would replace the party’s ambivalent position with opposition to the deployment of the Terminal High Altitude Area Defense (Thaad) system. “I am opposing it for the sake of national interest and peace [on the peninsula]. I will strongly demand the government reconsider its decision,” the new party leader said.