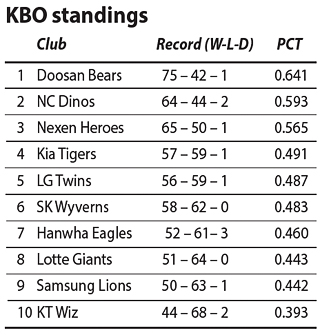 Doosan Bears continue their reign, while LG Twins fight to maintain their spot at fifth

With August almost over and the weather showing signs of cooling down, the Korea Baseball Organization (KBO) clubs that are likely to advance to the fall postseason are also starting to come into view.

There are just 19 games left in the regular season before the Korean Series, the KBO’s championship series. The top team of the regular season will automatically get a spot in the final game, and the teams that finish second through fifth will vie in a series of playoffs to see who competes against the No. 1 team.

The Doosan Bears are the Korean Series title defenders, and they have a good shot at holding down the fort as they are currently favored to finish the regular season in first.

The Samsung Lions, who vied for the championship title in the final game last year against the Bears, are struggling near the bottom of the league standings. The team might not even find themselves in the postseason this year, and if so, it would be the first time since 2009 that the Lions fail to advance to the playoffs.

The LG Twins, who have played in the postseason only twice in the past 10 seasons, have a decent chance at joining the postseason as the fifth-place team. The Twins are currently ranked fifth in the league standings, just one win behind the fourth-ranked Kia Tigers. 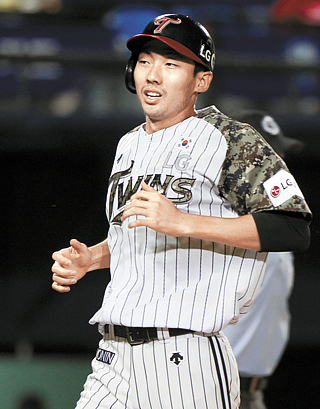 The hit came when the 36-year-old veteran took to the plate in the second inning as the lead-off during the Twins’ game against the KT Wiz. He cranked the seventh pitch by Ju Kwon and sent the ball to center field.

Jeong later added another hit to mark 2,001 hits in his career.

His 2,000th hit came with a career tally of 7,885 at-bats and 1,995 games. At 36 years and 2 months, Jeong is the second-youngest player in the KBO to reach this landmark career achievement. He is also the second right-handed batter to hit 2,000 and third Twins player after Lee Byung-kyu and Park Yong-taik.

Jeong started his career in 1999 with the Haitai Tigers, the predecessor of the Kia Tigers, and joined the Twins in 2009. He has never won an individual honor per se; the closest he came was finishing fifth in batting in 2012 with a .310 season batting average.

In contrast, all six batters before him who topped 2,000 - Yang Joon-hyuk, Jang Sung-ho, Lee, Hong Sung-heon and Park - had all won at least one individual title before reaching the mark.

Despite the lack of accolades for his performance, Jeong has remained in the game and proved his worth over the years. Although well into his 30s, Jeong has never failed to deliver a solid performance each season, batting an average of .305 in the past five years and raking in three-digit hits for the past six seasons, including this year.

Now, Jeong looks to set another milestone in his career: becoming the first right-handed hitter and fourth overall in the KBO to claim 2,000 hits and 2,000 games. With the former now accomplished, he only has five more games to go to achieve the latter.