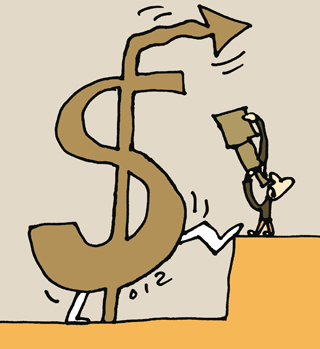 The U.S. Federal Reserve has indicated the climate is right to resume a lifting of interest rates it put off since the last hike in December, the first in nearly a decade. Citing solid improvements in the labor market and the U.S. economic performance being on track for the central bank’s outlook on growth and inflation, Federal Reserve Chair Janet Yellen on Friday said, “The case for an increase in the federal fund rates has strengthened in recent months.” Markets are now betting the hike could take place in the next Fed meeting in September rather than in November to avoid stoking unnecessary political misunderstandings around the Nov. 8 presidential election.

The U.S. Fed held off on tightening this year after the Chinese stock market crash in January and a faster-than-expected slowdown in the second largest economy. Many began to think further rises in U.S. interest rates wouldn’t be possible amid market volatility following the British decision to leave the European Union. But domestic circumstances press for higher interest rates. The U.S. unemployment rate fell to 4.7 percent in June, the lowest since 2007, and the average wage gained 2.6 percent on year. Home prices rose by 5.2 percent on average and U.S. stocks have been flirting with record highs. Although the inflation rate is hardly moving, the ultra-loose interest rate policy held for seven years and is creating bubbles everywhere.

It is naïve to think interest rates are determined by supply and demand factors. Monetary policy has always been political. The U.S. Republicans traditionally favor tax cuts to spur consumption and growth. The Democrats on the other hand try to aid the economy through cuts in interest rates to stimulate corporate investment and employment. They believe increases in jobs and wages can help ease income inequalities for low-income people and the working class, their traditional voting base. The legacy has been followed by Yellen and other pupils of Yale University professor and economist James Tobin.

Democrats have held onto power through the benefits of zero interest rates and the massive quantitative easing program amidst the 2007-2008 financial crisis. This unconventional monetary stimuli helped save the economy in the face of its worst-ever postwar crisis and recession and an increased unemployment rate. But criticism of the radical policy was equally great. Presidential candidates Donald Trump of the GOP and Bernie Sanders of the Democratic Party gained enormous popularity with their angry tirades and aggressive platforms against deepening polarization.

The ultra-loose monetary policy was lambasted by radical candidates of both the conservative and liberal camps. Trump claims the Fed isn’t raising interest rates to help Democrat nominee Hillary Clinton. Public confidence in the U.S. central bank slipped to 38 percent compared with above 70 percent 20 years ago. Slogans like “Fed up with the Fed” and “End the Fed” suggest the zero-interest-rate policy has lost political popularity.

The fallout from ultra-low interest rates has created messes around the world. Negative interest rates in Europe and Japan have only inflated real estate prices without aiding the overall economies. Home prices in Denmark, Norway, and Sweden, which pushed interest rates into negative territory four years ago, have jumped 11 percent to 12 percent annually. Instead of spurring investment, savings have shot up. Households are putting aside money for their old age as low interest rates make lives difficult to manage through dependence on pension income. Low interest rates have only ended up further dampening consumption and investment and instead made companies and households pile up money.

Japan is most confounded by the dilemma of low interests. When the U.S. starts raising interest rates, the funds pulling out of emerging markets will likely turn to yen assets for safety. The U.S. dollar plunged to 101 yen from 122 yen following the U.S. rate hike in December.

Japan has pushed interest rates to the negative zone to defend the yen, but it ended up elevating real estate prices instead of helping exports and the stock market. The lift-off in U.S. interest rates could jeopardize Japan’s Abenomics.

Ultra-low interest rates no can longer be a solution to the woes of the world economy. The Bank for International Settlements has raised concerns about uncertainties in the behavior of individuals and institutions in the strange new monetary landscape of prolonged low and negative interest rates. The International Monetary Fund has also warned central banks to take pre-emptive actions against bubbles in real estate prices.

Korea is not yet in a serious stage of inflated real estate prices and abnormal strengthening in the currency. The manufacturing sector has been running at normal rate and the benchmark rate of 1.75 percent is still safely above zero. But U.S. tightening tends to be merciless and Koreas’ household debt is at dangerous levels. Global crises always stem from debt and the tipping point has been hikes in U.S. rates.