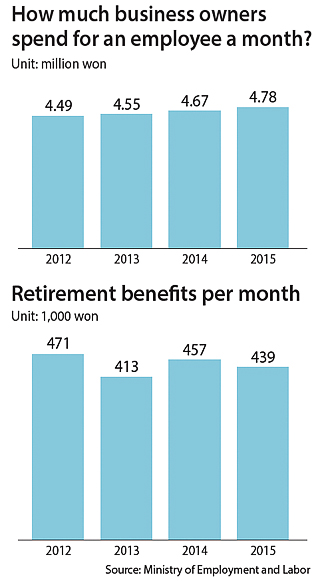 Business owners with more than 10 employees spent more per employee during fiscal year 2015 compared to the previous year, but growth has slowed as large companies have cut retirement benefits.

The owners paid 4.78 million won ($4,254) per employee a month on average, up 2.4 percent compared to the previous year, the Ministry of Employment and Labor said Monday. The amount includes salary and additional costs, including insurance and lunch fees.

“It is not a surprise for the amount to grow from the previous year since the wage in general continues to grow every year,” said Yang Hyun-soo, a director at the Labor Ministry. “However, one significant difference for the 2015 data is that the growth rate has slowed as large-sized companies lowered their retirement benefits compared to the previous year.”

In fact, the figure grew 2.6 percent in 2014, but the rate dropped to 2.4 percent last year. Actual salaries, including overtime and bonuses, rose 3.4 percent year-on-year to 3.79 million won, while the amount of other benefits, including insurance premiums and retirement packages, fell 1.2 percent during the same period.

“The figure dropped significantly due to the base effect from the previous year when it rose 10.8 percent year-on-year,” said Yang at the Labor Ministry.

By type, employers paid 78,000 won per employee a month for their meals and 24,000 won to support education fees for employees’ children. The average Korean received 21,000 won from the company for transportation and cellphone bills.

Data showed that there still are significant salary gaps between the large companies and relatively small companies, particularly on various benefits other than regular salary.

By sector, companies in electronics, gas and water earned the most in Korea. Employees earned 8.1 million won a month, followed by finance and insurance workers (7.94 million won) and manufacturing employees (5.4 million won).

The service sector, on the other hand, paid their employees the least. Service sector workers earned 2.3 million won a month, while those who worked in the lodging and restaurant businesses earned 3.1 million won.

The finance and insurance industry paid the most in retirement benefits. Employees who retire from the industry earned 842,000 won a month on average, while those in the service industry made 156,900 won.